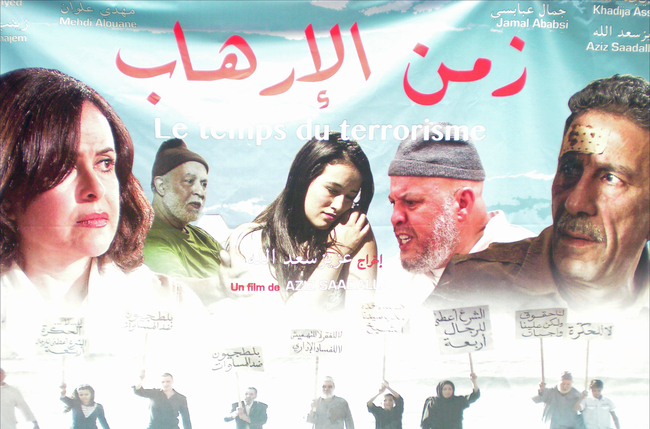 *”Morocco is a country which is essentially based on tolerance & knowing how to live together with our differences. It is these values which, throughout history, have made Morocco as strong as it is.”*

Magharebia, by Hassan Benmehdi in Casablanca (Casablanca, Morocco, June 3, 2013) — The Casablanca suicide bombings of May 16th, 2003 continue to provide a source of inspiration for Moroccan film directors.

Last year, Nabil Ayouch won international recognition for “Les Chevaux de Dieu“, which examined the social and cultural factors that led 14 boyhood friends from a working-class district of Casablanca to kill themselves and dozens of others.

The latest movie to address the issue of youth indoctrination and recruitment, “Le Temps du Terrorisme” (The Time of Terrorism), officially hit the big screen on May 22nd.

But it made its premiere on the 10th anniversary of the suicide bombings.

According to director Aziz Saadallah, the movie conveys a very simple message: “We don’t want any more terrorism; we don’t want a repeat of 2003.” His film seeks to highlight the importance of dialogue and exchange in eliminating backward thinking, Saadallah added.

“Morocco is a country which is essentially based on tolerance and knowing how to live together with our differences,” commented Fouad Laroui, a Moroccan intellectual. “It is indeed these values which, throughout history, have made Morocco as strong as it is.”

The bombings were the deadliest ever seen in the kingdom. And the worst of the 2003 Casablanca attacks occurred at the Casa de España. Some 15 people, including children, died at the Spanish eatery.

Fourteen young men under age 23, who grew up together in the Hay Sidi Moumen shantytown of Morocco’s biggest city, launched the suicide bomb attacks on restaurants, the Hotel Farah and a Jewish community centre.  Twelve suicide bombers and 33 civilians were killed in the five blasts. Scores more were injured.

Attacks have occurred since May 16th, 2003, but the Casablanca bombings shattered the image of Morocco as a country untouched by terrorism and heralded its transition from one era to another.  In recent years, filmmakers have seen a need to revisit the tragedy.

“This film has really highlighted the danger of religious radicalism, which threatens the cohesion of Moroccan society.” Nadia and Merouan, two young bank employees from Casablanca, told Magharebia.

Artistic creations can indeed improve understanding of how religious extremism develops, young sociology researcher Abdelkbir Noceir said. “It’s when we look at ourselves that we discover a lot of things,” he said.

The objective of “Le Temps du Terrorisme”, the director said, was to lay bare the hidden face of religious extremism and the societal issues contribute to fanaticism in Morocco. In the director’s view, this poses a serious threat to the pacifist structure of Moroccan society.

The movie’s story is told from the perspective of M’jid, who sees the violent behaviour of his neighbour Omar towards his wife and his twelve-year-old child. His neighbour also sympathises with radical religious groups.

To see how those who spread reactionary ideas operate, M’jid begins to take a closer look at Omar.

[…] Moumen shantytown of Morocco’s biggest city, launched the suicide bomb attacks on restaurants, the Hotel Farah and a Jewish community centre.  Twelve suicide bombers and 33 civilians were killed in the […]