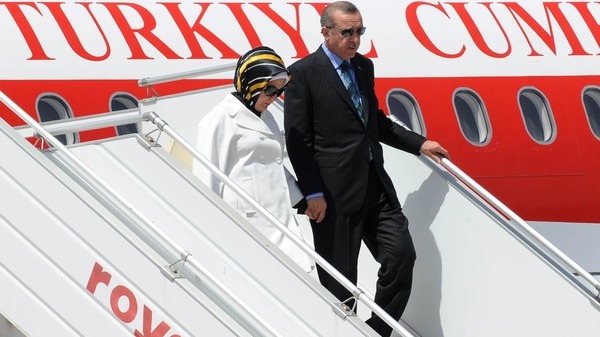 Al Arabiya/AFP (Rabat, Morocco, June 3, 2013) — Turkish Prime Minister Recep Tayyip Erdogan arrived in Rabat on Monday at the start of a tour of the Maghreb region, an AFP photographer reported, as unprecedented anti-government protests swept Turkey. Erdogan, who is accompanied by several ministers and a large delegation of businessmen, landed at Rabat airport at around 1400 GMT.

The Turkish premier is due to hold talks with his Moroccan counterpart Abdelilah Benkirane, who like Erdogan hails from an Islamist political grouping called the Justice and Development party.  He is also scheduled to meet Morocco’s Foreign Minister Saad Eddine El Othmani and chair a forum of business leaders from both countries.

Ankara and Rabat signed a free trade agreement that came into force in 2006 and bilateral trade more than doubled by the end of 2011 to reach $1.3 billion, according to the Turkish ambassador to Morocco Ugur Ariner.

Erdogan is expected to leave Morocco for Algeria on Tuesday morning before travelling to Tunisia on Wednesday, where he will take part in the first meeting of the Turko-Tunisian strategic cooperation council, according to his office. He is due to return to Turkey on Thursday.

The Maghreb tour comes on the fourth straight day of protests that have turned into the biggest outburst of anger at Erdogan’s Islamist-rooted government since it took power more than a decade ago.

The demonstrations started over an unpopular building project in Istanbul but boiled over into general anti-government protests that spread to dozens of cities across Turkey, after a heavy-handed initial response by the police.

The protesters have denounced Erdogan as a dictator and accused him of seeking to impose conservative Islamic values on Turkish society.

But the prime minister has remained defiant, vowing before his departure on Monday to “stand firm” against the protests, and saying the demonstrators should show their discontent at the ballot box, while admitting “mistakes” by the police in their initial response.

Turkey’s President Abdullah Gul struck a more conciliatory note on Monday, urging calm and promising the anti-government protesters that their message had been “received.”

North Africa and the intertwined Sahel, from Egypt to Mauritania, is a region that has undergone profound and destabilizing political and social change in the last several years, especially since the “Arab Spring” of 2011. Nascent political systems, newly empowered non-state actors, and underlying structural problems in the region contribute to an increasingly volatile mix, the implications of which—especially terrorism—are global in scope.