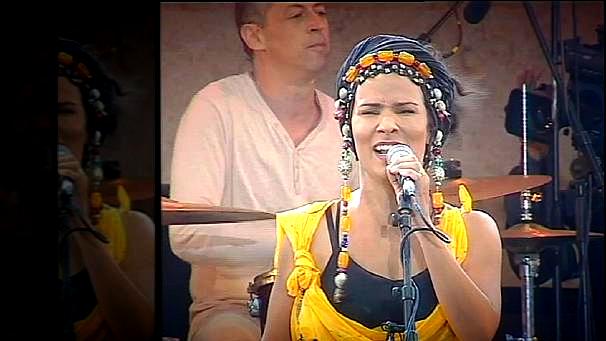 *“I am from this country and in this country there are so many cultural and musical things…Africa, Arabic, Orientalism, Berber…I am all about plurality, diversity”*

Euronews (June 27, 2013) — Oum El Ghaït Benessahraoui is a true Moroccan diva. With her trademark seductive voice, she performed at the Gnaoua World Music Festival, on the stage for upcoming talents.

Born in Casablanca, she grew up in Marrakech. After studying architecture, she decided to make music her profession.

In the past she has explored many genres from soul to hip hop via jazz and disco but recently she has focused on her cultural heritage and has just released a new album called Soul of Morocco.

She told euronews: “I am from this country and in this country there are so many cultural and musical things. There’s a bit of Africa, a bit of Arabic influence, Orientalism and also some Berber, because I am all about plurality, diversity, I am not into monoculture, one-way.”

She has written and composed all the tracks on her new album and even her band is international, with musicians hailing from Morocco, France and Cuba.

He said: “My work on this disc was to take the rhythms of northern Africa – whether that’s Morocco or Algeria – and to integrate it with jazz, to try and find new ways of putting rhythm in jazz.”

His album is a collaboration with many internationally known artists, including American keyboard player Scott Kinsey who has worked on several major film soundtracks including Ocean’s Eleven and Twelve.