Bloomberg News, by Matthew Boyle (Agadir, Morocco, June 30, 2013) — Sitting barefoot on blood-orange pillows in a village near the seaside resort of Agadir, a dozen Moroccan women in multi-colored caftans banter while hitting acorn-shaped nuts with stones in metronomic fashion — tap, tap, tap — until they crack, revealing a kernel or two inside.

The Berber women earn 40 dirhams ($4) for a day’s work producing about a kilogram of the dime-sized kernels, which are ground and pressed to release an oil so rare, so versatile, and so potent that it can sell for the equivalent of $400 a liter in beauty boutiques worldwide.

Dubbed “liquid gold,” amber-hued argan oil is the latest obsession of the $430 billion personal-care market. It strengthens hair, soothes skin, and even tastes good drizzled on a salad. It’s everywhere, from Oscar-night celebrity gift bags to the aisles of Wal-Mart (WMT) Stores Inc. and Tesco (TSCO) Plc. Last year saw the debut of 588 new argan-oil hair products, according to researcher Mintel, up from 29 in 2008.

The argan craze calls to mind previous beauty fads, like that for jojoba, another gold-tinted oil from arid climates. Jojoba is now found in a wide array of everyday household items, like liquid hand soap. While argan oil risks similar overexposure, its ability to create livelihoods for rural Berber women will help preserve its cachet, analysts say. 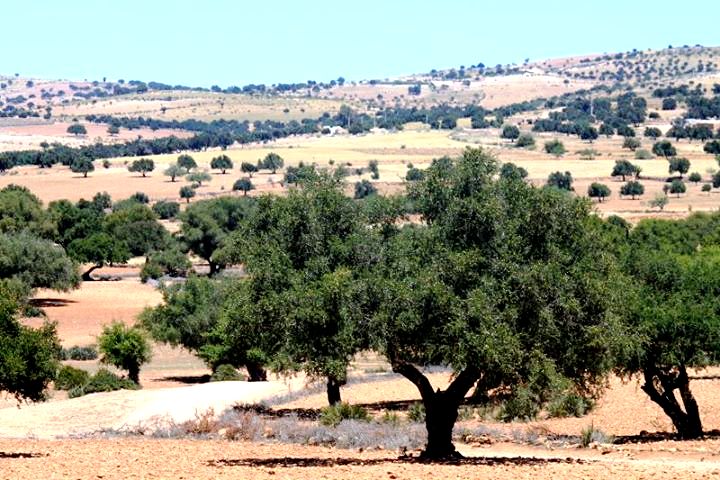 The argan tree is indigenous to Morocco.

And argan products can provide an additional lift to global sales of hair-care products, which will grow 30 percent to nearly $100 billion by 2017, data tracker Euromonitor International predicts.

Morocco’s exports of argan oil have more than doubled in the past five years, to over 700 tons, according to government data. Much of that has gone to hair- and skin-care makers likeL’Oreal SA (OR) and Unilever. France’s L’Oreal, the world’s biggest cosmetics producer, this year will buy three times more argan oil than it did five years ago. U.S. department-store sales of products with argan oil rose 59 percent last year, following a 159 percent increase in 2011, according to researcher NPD Group.

Rising demand has boosted wholesale prices 50 percent since 2007, to $30 a liter, while retail prices can exceed 10 times that figure. Oil certified under Fairtrade production standards goes for even more. Those prices have led some to resort to less-than-savory tactics, passing off diluted “Moroccan oil” blends as 100 percent argan.

“It’s like the Mafia,” said Afafe Daoud, a project manager who works with a cooperative near Agadir. The group of 60 Berber women produces Fairtrade argan oil under its own brand, Tounaroz, and sells it across Europe.

Records of argan oil extraction trace back to the 13th century, when locals would gather the oil-rich nuts excreted by goats that climb trees to eat the plum-sized fruit. Today, argan oil processors use nuts that haven’t passed through a goat’s intestines, instead hiring Berber women to extract the seeds from their shells.

Endangered by construction and farming, argan trees –spiny evergreens with a lifespan of about 150 years — have come under United Nations protection, and the oil seeks the same geographic certification enjoyed by Parma ham and French Champagne in Europe. The trees, which thrive in Morocco’s semi-arid soil, are difficult to cultivate elsewhere. 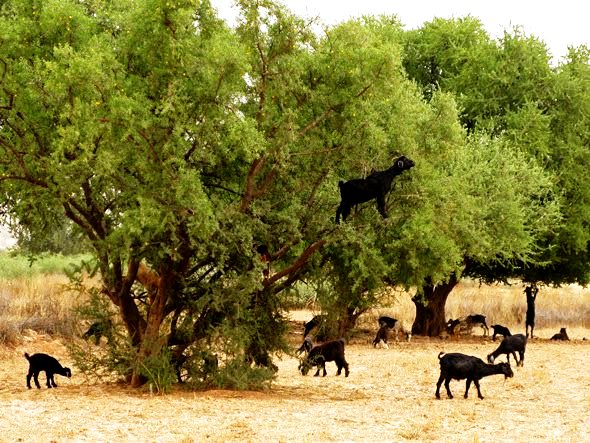 For centuries, Berber tribes have lived with their flocks of goats and their argan trees.

Not that some aren’t trying. Chaim Oren, an agronomist behind an Israeli company called Sivan, says he is growing what he calls the “magical tree” on 100 acres in the Negev Desert.

“There will be less oil available than demand,” Oren said by telephone. “We want to fill this gap.”

The arrival of L’Oreal and Unilever (UNA) — as well as smaller U.S.-based beauty specialists like Organix, Shea Moisture andAura Cacia — reflects the growing appeal of natural oils. For years, many women were reluctant to put oils directly on their scalp or skin, fearing a greasy residue. Brands reflected those concerns: Procter & Gamble’s (PG) Oil of Olay changed its name to Olay in 2000.

Yet in recent years, consumers have embraced all things natural, from baby foods to cleaning products. That’s helped argan, which migrated from an expensive treatment in salons to mass-market shampoos, conditioners and soaps. British beauty boutique Neal’s Yard Remedies today sells a 4-gram argan lipstick in six colors such as Persimmon, Blackberry and Lychee, for 15 pounds.

The fruit of the argan tree.

American drugstore chain Walgreens Co. (WAG) carries 160 argan-infused products, up from zero three years ago, said Shannon Curtin, a merchandise manager there. She expects the chain to cull some its argan offerings in coming years as the novelty wears off.

“There are so many products now that consumers are getting a little bit confused,” Curtin said.

That hasn’t happened yet for Vivian Bernstein, a 37-year-old lawyer in Amsterdam, whose hairdresser recommended the oil a year ago for her long, blonde locks. She liked that it made her hair soft without being greasy, and she now buys argan-infused shampoos and conditioners. “It’s got sticking power,” she says.

L’Oreal says it gets argan oil from the German chemical giant BASF (BAS) SE — which buys from Berber cooperatives. The company says it’s able to find sufficient supplies, partly because the increasing value of argan has helped convince people living among the trees to stop cutting them for firewood. 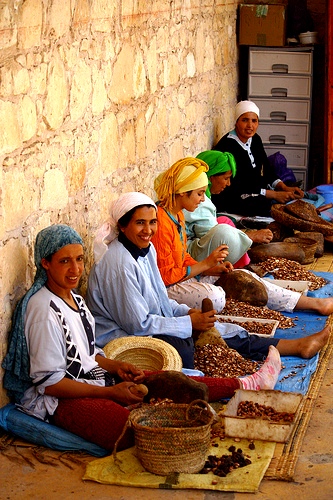 Business of harvesting, processing & marketing the fruit & oil is almost entirely an activity of village women.

“Before this, the men made everything,” said Belfarah Fatima, a 70-year-old mother of six with more grandchildren than she can count, as she cracks argan nuts at a cooperative in Tagadirt N’Aabadou, a village of mud-brick houses at the end of a rutted gravel road outside Agadir.

Fatima’s cooperative is part of a network founded by Zoubida Charrouf, a Moroccan chemist who has studied the oil’s properties for nearly 30 years. In the mid-1990s, Charrouf began organizing Berber women to produce and sell argan over the protests of their husbands, who claimed Charrouf was only out for their money. Her initial 16 volunteers were all widows and divorcees, she said, seated in the lobby of a Casablanca hotel on a drizzly Friday morning. Today, there are over 150 cooperatives, the most successful of which generate sales of 500,000 euros ($650,000) a year.

Browsing through a market near the hotel, Charrouf notes the argan products on display, including oil from the Tighanimine cooperative that she helped establish. She’s not buying any, though. Proving the fickle nature of beauty trends, she’s moved on from argan and has started using cactus oil on her skin instead. “It’s more expensive,” she said, “but it’s better.”