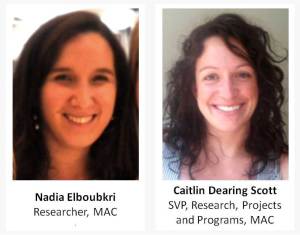 This event was the latest in a series of events on women’s rights in the Middle East in the aftermath of the Arab Spring – a time when women from the region and scholars alike expressed both hope and fear for the future of women’s rights.

Now, some two years on, in light of recent mass protests, changes in government, and ongoing human rights issues in the MENA region, many are rightfully wondering: what is the vision for the future of women’s rights in the region? And what role, if any, can international human rights norms play in ensuring that this future is positive?

A major topic of the panel was a discussion regarding how countries implement the Convention on the Elimination of Discrimination Against Women (CEDAW) and an assessment of its capacity to promote change.

In the Middle East, its impact has been varied.  In Morocco, for example CEDAW has helped motivate major changes for women in employment, education, and health care, as well as marriage and inheritance. In other countries, responses vary from outright hostility to lip service or partial acceptance of CEDAW norms.

This raises questions about how important CEDAW is in promoting women’s rights, not only in the MENA region, but elsewhere. There is no doubt that obtaining women’s rights and gender equality will not happen overnight and will not happen merely because of international law. It is both a deliberate and unconscious process – deliberate in that reform must be implemented and reinforced by authorities, and unconscious in that over time, education and awareness will transform new practices into established norms.

There is likewise no doubt that CEDAW has been instrumental in promoting women’s rights – or at least setting in the standards for discourse about the best means to do so. The evolution of women’s rights in Morocco is an interesting illustration. Since Morocco ratified CEDAW in 1993, the country has gradually made women’s rights a crucial element in political, social, and economic activity.

In 2004, King Mohammed VI introduced groundbreaking reform to the Family Code, or Moudawana, giving women unprecedented rights within the family and greater protection of their rights within marriage and divorce, and criminalizing public and domestic violence against women. This reform required a deliberate commitment by King Mohammed VI first and foremost, but the ratification of CEDAW – and subsequent removal of Morocco’s reservations to the convention – proved both symbolic and essential in ensuring that Morocco’s laws complied with international norms.

This process accelerated with adoption of a new constitution in Morocco in 2011. Women asserted themselves in the national debate on civil liberties, human rights, and equality conducted to inform the drafting of the Constitution. As a result, the new Constitution improved women’s status in Morocco by:

Though the past few years have witnessed real change in Morocco, much remains to be done.

In Morocco, we are constantly reminded that achieving equality is a marathon, not a race, and we have seen a gradual, yet thriving reform process where women started as marginal non-state actors and have now become fundamental actors in the Moroccan public forum.

The efforts of human rights activists, scholars, civil society, and the government are positive steps in the direction of achieving the ultimate goal of universality. The gains that women have made in Morocco have set a standard for future reform not only in Morocco, but in North Africa and the Middle East.

Here’s hoping CEDAW can serve as a similar guide in the rest of the region.

Nadia Elboubkri is a Researcher at the Moroccan American Center