Even before the publication of a 2008 landmark study by the Peterson Institute identifying the benefits of regional economic integration in the Maghreb, international organizations and experts were expressing concerns that cross-border politics were depriving the area of much needed incentives to intra-regional trade.

This past week, at the 3rd Maghreb Entrepreneurs Forum held in Marrakech, that theme was echoed by participants from the private and public sectors.

The Forum was organized by the Maghreb Employers Union, a coalition of employers from across the region who are trying to do what politicians are reluctant to do – move towards greater economic integration through closer cooperation and coordination of supply chains and marketing.

Among the many speakers was Miriem Bensalah Chaqroun, president of the Moroccan business confederation (CGEM), which hosted the event.

She noted that “Trade between the UMA [Arab Maghreb Union] countries [Algeria, Libya, Mauritania, Morocco, and Tunisia] represents on average only 3 percent of global trade in these countries, which represents the lowest level of integration in the world.”

The forum has created an initiative called the Maghreb Trade and Investment Initiative (IMCI) to provide a roadmap to strengthen trade and intra-regional investments.

The topic of lost opportunities was echoed in a message to the participants from IMF Managing Director Christine Lagarde: “The economic integration of the countries of the Maghreb Union could create, according to our studies, between 2 and 3 percent additional GDP per year for each country.”

Simon Baker, Director of the Maghreb section of the World Bank, added, “Currently the Maghreb counties often compete on products exported to the EU in particular. But there is a significant potential for a better division of labor through the establishment of value chains and regional production.” He also noted that “Studies conducted by the World Bank show that the loss of earnings due to the lack of Maghreb integration is estimated at 3 to 9 billion dollars per annum for the region as a whole.”

While the countries of North Africa struggle to overcome obstacles to greater integration, King Mohammed VI of Morocco has turned his attention to West and Central Africa as natural markets for the Kingdom.

He has embarked on his second trip to Africa in less than a year to strengthen diplomatic, economic, and cultural ties with Morocco’s neighbors to the south.

“This keen interest in the continent’s development is nothing new,” according to the Med Africa Times, “since Morocco cancelled as early as 2000 all the debts of the poorest African countries and exempted their products and goods from customs duties.”

The current visits are taking the King to Mali, Guinea, Cote d’Ivoire, and Gabon.

The article goes on to point out that “Morocco has tirelessly endeavored to strengthen and diversify its economic relations with Africa and to encourage investments, at the institutional level as well as at the level of the private sector which has significant investments in several sectors including banking, telecoms, housing, insurance, and mining.”

As with his earlier tour of African countries, the King will preside over political and economic cooperation agreements to support increased economic partnerships throughout the continent. 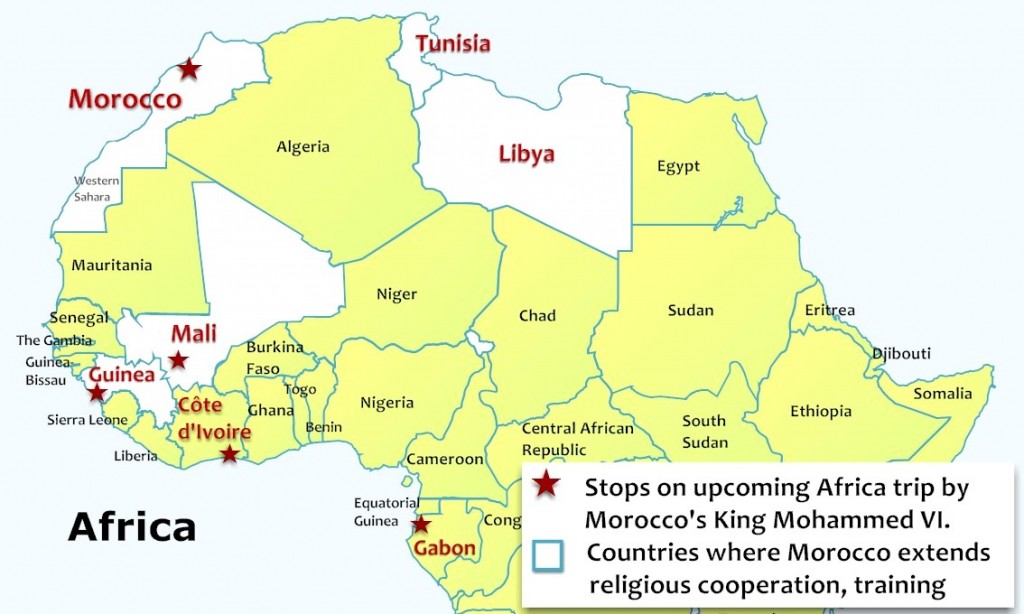 In one initiative, for example, the OCP Group, Morocco’s giant fertilizer company, the largest producer in the world, will invest more than $600 million to build a fertilizer factory in Jorf Lasfar dedicated entirely to the African market, where record level economic growth is anticipated in the next ten years. The plant’s planned production of one million tons of fertilizer annually will be exported exclusively to Africa, according to OCP Group’s president Mustafa Terrab, who made the announcement during the King’s visit to Mali.