* Morocco’s Family Law reforms and Constitution have been hailed as big steps forward by women’s rights activists.  But with conservative social traditions, one expert says, “it takes much more time for changes in the law to be translated into practice,” reporter Aida Alami writes in The New York Times. *

MOTM — The New York Times (March 17, 2014) reports that a decade ago, at King Mohammed VI’s direction, “Morocco adopted a family code hailed by women’s rights groups as a big step forward. Three years ago, the country passed a new constitution guaranteeing gender equality.” Even with these reforms, the article reports “Moroccan women say that equality is still a long way off.” But, as reporter Aida Alami observes, “the pressure for change is building.” 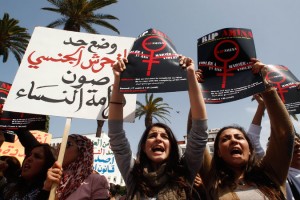 When Zineb lost her father at the age of 15, her grief was compounded when she learned that she had to share his inheritance with an older half-brother unknown to her or her mother and sister. “It felt unfair to split it with him,” said Zineb, 29, a teacher in Rabat who asked that her full name not be used because as a political activist she is concerned about her safety. “Somebody was parachuted into your life and we didn’t know him and after all, my mom worked for half of all of that money.”

A decade ago, Morocco adopted a family code hailed by women’s rights groups as a big step forward. Three years ago, the country passed a new constitution guaranteeing gender equality. Even so, Moroccan women say that equality is still a long way off, and much of the old order remains untouched, including the inheritance law section of the family code. That law, laid down in the Quran, states that male relatives receive double the inheritance of women. But the pressure for change is building. “Islam allows for reinterpretation, and it is time for radical decisions to protect women,” said Saida Kouzzi, a founding partner at Mobilizing for Rights Associates, a nongovernmental organization based in Morocco. “This law of inheritance was based on the fact that men were the head of the households, which is not the case anymore as many women are the ones who provide for the family or at least contribute in a significant manner.”

In 2004, Morocco rewrote its code of family law, establishing the right to divorce by mutual consent, placing limits on polygamy and raising the minimum marriage age for women to 18 from 15. But no changes were made with respect to inheritance. At the time, the Moroccan ruler, King Mohammed VI, had to arbitrate between the demands of feminist organizations, who were calling for an expansion of women’s rights, and the Islamic political parties, who were strongly resistant to change. But terrorist bombings in 2003 that killed 45 people in Casablanca weakened the Islamist parties and paved the way for the adoption of the new family code. The king seized that opportunity to make it clear that he was the country’s top religious authority.