Magharebia takes a look at upcoming reforms which will be debated in Morocco’s Parliament, involving such issues as elections, labor, and subsidies: 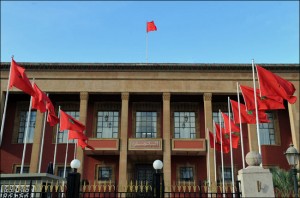 From electoral laws to subsidy reforms, Moroccan parliamentarians will face a range of issues when they get back to work. Photo: AFP/Abdelhak Senna

The beginning of Morocco’s new parliamentary session and the resumption of labor disputes in September will be lively, according to experts.

A number of items are on the government’s to-do list and need to be settled with political and trade union figures.

The top item on the agenda for the new parliamentary term is election preparation, said Noureddine Mediane, the leader of the Istiqlal group in the Chamber of Representatives. The government is continuing to consult political parties over electoral laws, which do not have the unanimous backing of politicians.

“Politicians have different views on whether voter cards or just national identity cards should be used when voting. The draft organic law on local authorities drawn up by the government has angered political parties in relation to the powers of these authorities and their leaders,” explained political analyst Karim Najemi, who underlined that the prime minister will have his work cut out during the new legislative term.

Pension reform is another hot topic that the government must examine together with the relevant parties, according to MP Larbi Habchi, a member of the Democratic Labor Federation (FDT).

The government submitted draft texts on the reform to the Economic, Social and Environmental Council in July and is awaiting this body’s opinion so that it can launch the reform process.

“We should expect to see a fierce battle between the government and trade union federations over pension reform. In any case, the government has promised to resolve the issue in 2014 so that it can start implementing the reform in 2015,” Najemi said.

The talks between the government and labor unions, which are set to resume in September, are certain to involve heated debates about not only pensions but also people’s spending power, he added. Spending power is closely linked to reform of the Subsidization Fund, which will be another big issue during the new parliamentary term.

Rahim Boulma, a sociologist, commented that the policy of removing subsidies on petroleum products and direct financial aid would have an impact on social harmony in Morocco because of the impact on prices and the difficulty of targeting the less well-off.

There will be bitter negotiations when the draft budget for 2015 begins to be considered in parliament in October, Boulma said.

The major concern for the public is spending power. Selma El Marbouhi, an employee, said that when the new parliamentary term begins and labor negotiations resume, government figures and trade union representatives must discuss the need to increase people’s spending power, which fell as the prices of petroleum products climbed.

“We need to think about a comprehensive policy including reform of the Subsidization Fund and wage increases. There also needs to be a strategy on access to housing for the middle class,” she said.

That view was shared by Mohamed El Midouni, a public-sector worker, who said that the social dimension must be the central topic of debate during the new parliamentary term.

“It is important to think about the middle class, which has become poorer as its spending power has reduced over the years. Measures to preserve spending power must feature in all of the reforms that are under way,” he said.