Maghreb Arab Press has this story on Morocco’s improvement in the latest version of the World Economic Forum (WEF) Global Competitiveness Rankings. Morocco moved up 5 places, as the WEF notes reduced budget deficits, improvements in education, and other reforms as reasons for the improvement: 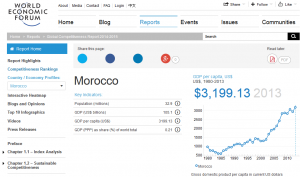 Morocco has moved up five places to 72nd place in the 2014-2015 report, which assesses the competitiveness landscape of 144 economies, providing insight into the drivers of their productivity and prosperity.

According to WEF experts, Morocco’s progress is mainly the result if a reduced budget deficit (between 2012 and 2013) and improvements in primary education and innovation.

Some aspects of its institutions have improved as well, reflecting Morocco’s relative social and political stability and efforts made over recent years to modernize its business environment, particularly its administrative aspects, the report points out…[Full Story]