The Independent travels through Morocco, taking in the sounds and tastes of Tangier, Rabat, Marrakesh, and others: 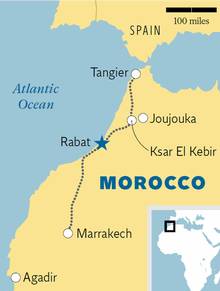 The Marrakesh express train rattles off into the hinterland of Morocco through a desert that stretches on forever, an inky black sky crowding in on the lonely palm trees. It’s impossible to exaggerate the quietness of the rolling hills, with stars stretching to infinity, and only the most occasional light in the gloom.

Not too many hours later, I’m standing amid the most crazed cacophony, surrounded by massed drums, hucksters shouting, the reedy spiraling of snake charmers, performing monkeys, buzzing motor scooters and amplified calls to prayer. I don’t know of another country that’s so quiet and so loud, so calm yet so frenzied.

I’d begun my journey in Tangier, a tight-packed city whose foreignness seems familiar; wander around the medina, and for all the noise and intensity it’s easy to orientate yourself, its hippie and Beat landmarks all fall into place. I look for a coffee and happen on the Café Central, regular haunt of William Burroughs and Brion Gysin; I search out seafood and am soon queuing outside the Restaurant Populaire Saveur de Poisson on the Escalier Waller. I’m halfway through a succulent bowl of tiny squid before I realize I’m just a couple of doors down from a legendary Sixties haunt, where store owner Akhmed hosted Keith Richards, Brian Jones and Anita Pallenberg, all keen to sample the hash he kept in an antique wooden box…[Full Story]