Al-Monitor investigates IS (aka ISIS) and the emerging dynamic with AQIM: 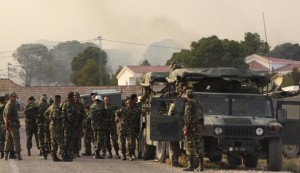 In coordination with Western security agencies, Tunisia and Algeria are leading operations to trace jihadists from Algeria, Tunisia and Libya as they move to declare an Islamic State (IS) emirate in North Africa.

Algerian security sources told Al-Monitor that the operations began to take shape as in mid-August, dozens of jihadists who had defected from al-Qaeda in the Islamic Maghreb (AQIM) were observed in southeastern Algeria, near the southern border of Tunisia and not far from the northwest of Libya.

When Abu Abdullah Osman al-Assimi, AQIM’s judge for central Algeria, pledged allegiance to IS, fears grew that Abu Bakr al-Baghdadi’s state will soon establish an emirate in the Maghreb…[Full Story]