BBC News reports on Secretary of State John Kerry and his current Middle East tour aimed at building support against the rise of IS: 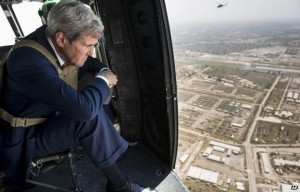 The world cannot watch the spread of “evil” from the Islamic State militant group, US Secretary of State John Kerry has said in a news conference in Iraq.

Mr Kerry, on a Middle East tour, said IS was the “single greatest threat” the people of Iraq now face.

He said there would be a global plan to defeat IS, but the new Iraq government must be the “engine” of that fight.

IS has seized large areas of northern Iraq, overrunning the army and gaining backing from some disaffected Sunnis…[Full Story]