The Daily Beast explores ancient the libraries of Chinguetti, founded in the 12th century to serve as a resting point for the Saharan trade routes crisscrossing present-day Morocco, Mauritania, and Mali: 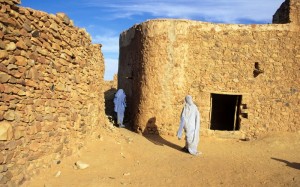 A once-bustling center of learning in the middle of the Sahara Desert is now a dry, sparsely populated town trying valiantly to save its ancient, extraordinary libraries.

In a mud-and-brick town that blends in with the rusty red sand of the vast Sahara, generations of families have been guarding ancient books—some perhaps 1,000 years old—and with them, the reputation of a once-legendary, enlightened city. These libraries—mostly simple, mud-packed shelves stacked high with bound manuscripts in ancient huts—are what remain of a place that in better times was the epicenter of Islamic learning and medieval trading in northern Africa. In Mauritania, Chinguetti once flourished with scholars, pilgrims, and religious leaders. But today, the few thousand people left have been fighting against the harsh desert to maintain control of their precious artifacts.‬

The remaining 10 or so libraries hold frayed remains of ancient books on Quranic studies, science, and law. They’re tended to by the same families who’ve been passing down their literary treasures for generations. Some hold just a few shelves and boxes of manuscripts, but one contains an organized collection of 1,400 texts…[Full Story]