Magharebia reports on Moroccan security services’ coordinated effort in breaking up an international drug ring, which was in the process of moving cocaine from Latin America to Europe: 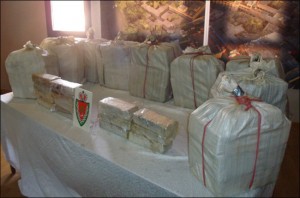 The drugs were being transported in a refrigerated lorry from Agadir and were hidden in crates of fish, according to the initial findings of the inquiry presented to the media by the police. The cocaine was headed for a foreign market, according to the chief of police, Mohamed Dkhissi.

“The street value of this quantity of pure cocaine is estimated at over 226 million dirhams (20 million euros),” Dkhissi said.

Police said that the convoy was discreetly watched for two hours before the lorry was surrounded by officers from the security and intelligence services, who forced the driver to stop so that they could search the inside. The search, which was carried out with the aid of trained dogs, turned up packages of cocaine, which were ready to be delivered.

According to Yassine Abdelkarim, a Marrakech-based correspondent for an Arabic-language daily, the gang members ranged in age from 24 to 50.

“They worked for international drug trafficking networks and formed a link between Europe and the Americas via Morocco,” he told Magharebia.

“In this operation, the drugs that were seized had arrived at the port of Agadir from Latin America,” he continued. “They were destined for a country in southern Europe. They were supposed to get there from northern Morocco via the town of Larache. But they were halted in Marrakech while in transit.”

He underlined that investigations were still being conducted in co-ordination with Interpol in order to tackle the rest of this network, which is in Spain.

Abdelkarim added that there were “other offenders who are on the run”.

Behind them lie international drug trafficking networks, he said, that use “individuals who are carefully chosen by exploiting their disadvantaged social situation”.

The Directorate-General for National Security (DGSN) on Wednesday (September 10th) said that judicial police in Marrakech, in co-operation with colleagues from Tetouan, arrested two people in Ksar el-Kebir on Tuesday linked to the international ring…[Full Story]