The Washington Post reports on the big news in Paleontology this week; a new massive swimming dinosaur called Spinosaurus which was discovered in Morocco: 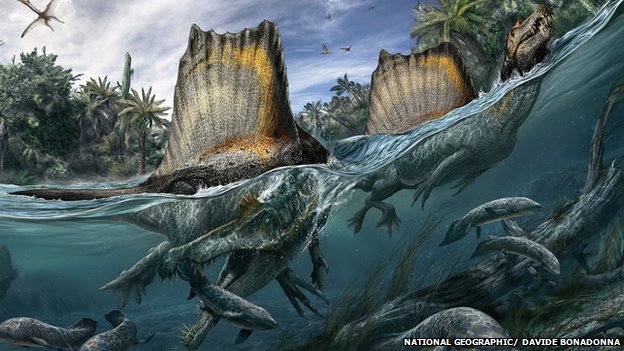 The discovery of the world’s first semiaquatic dinosaur — known as the Spinosaurus and on display as a replica starting Friday at the National Geographic Museum — nearly didn’t happen.

And it only happened from the kind of luck concocted in movies.

Nizar Ibrahim, a paleontologist, was traveling in 2008 in Morocco, researching the country’s Kem Kem beds, a Mars-like graveyard full of innumerable dinosaur fossils buried 95 million years ago. One day, a Moroccan fossil hunter came up to him on the dusty streets of Erfoud, an oasis town where dealers and hunters gather before expeditions…[Full Story]