Morocco has completed yet another project to modernize infrastructure in the country. The Casa-Port rail network extends over 33,500 square meters, designed to transport over 20 million passengers each year: 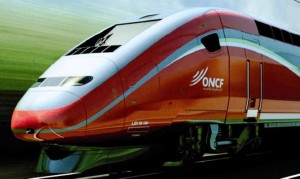 The new railway station, the first of the kind nationwide in terms of design and equipment, is part of large-scale development projects launched by the Sovereign across the country. It also reflects the King’s permanent will to support urban modernization, restructuring process and inter-city mobility.

Located at the heart of a mutating city, the new station, worth 400 million dirhams, perfectly fits into the scheme to reshape the Casablanca agglomeration and the urban space around the railway station, at the crossroads of the metropolis’s major avenues, the city’s port and the Hassan II Grand mosque.

After the new railway compounds built in Marrakech, Fes and Tangier, designed as smart and multi-services living spaces, the Casa-Port railway station has crossed a new level with an outstanding scope in this concept that makes of railways stations a community space for customers and the large public…[Full Story]