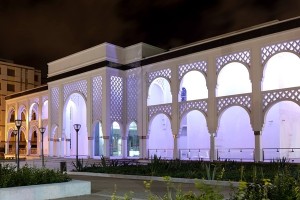 Morocco has just opened its first museum devoted to contemporary art, and the first major museum built since the country gained independence from France in 1956.

King Mohammed VI—was on hand Wednesday to open the new institution, which bears his name, the AFP reports. The Mohammed VI Modern and Contemporary Art Museum (MMVI) has been under construction in central Rabat for a decade. Its design was inspired by traditional Moroccan architecture and cost about $21.5 million to build. The inaugural exhibition at MMVI, “1914–2014: 100 Years of Creation,” brings together some 400 artworks by 150 Moroccan artists, and represents both the strong tendencies toward abstract and figurative art in the country’s recent output…[Full Story]