An anti-extremism initiative is sweeping through Morocco, featuring public demonstrations against violence: 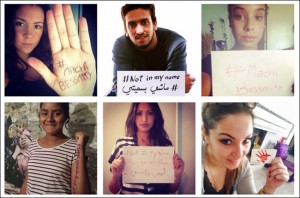 The expression “not in my name” has become “the rallying cry of all those who believe quite simply in humanity”, editorialist Narjis Rerhaye says.

Created to condemn criminal acts committed by terrorists in the name of Islam, the “Machi Bessmity” (“Not in My Name”) initiative has struck a chord with Moroccans.

In a public statement, those who started the appeal on September 26th stressed that it was a call against all acts of barbarism perpetrated by bloodthirsty fanatics who consider themselves to be Muslims.

“These are ignoble acts, which cannot under any circumstances be attributed to Islam, and yet they are being committed in our name,” they said in the statement.

A campaigner and one of the people behind “Not in My Name”, Ahmed Ghayet, said: “Our ‘Machi Bessmity’ initiative has been met with huge success, with 4,000 members in 48 hours and hundreds of young people publishing ‘Machi Bessmity’ photos on Facebook.”

Stickers bearing the logo have been distributed among participants in the 11th Tourism Summit, a video was posted to YouTube, and the “Machi Bessmity” logo was being displayed on all taxis in the city of Marrakech.

Editorialist Narjis Rerhaye witnessed the same thing, reporting that in just a few hours, more than a thousand young people got involved and signed up to express their total rejection of barbarity.

Rerhaye continued by saying that following the atrocious and unjustifiable murder in Algeria of a French mountain guide, condemnation had overtaken the British social networks: “But very quickly the expression ‘not in my name’ entered widespread use, becoming the rallying cry of all those who believe quite simply in humanity.”

The terrible crimes committed by the Islamic State (ISIS) in Iraq, Syria and most recently in Algeria highlight the need to mobilise all human beings across the world, campaigner Najat Alyadani told Magharebia

“No way should we give in to the horror of these terrorists, who continue claiming more victims around the world,” Alyadani said.

Young Moroccans have signed up in large numbers to this initiative.

One young woman, Halima Addoufri, from Casablanca, said that the terrorists were bringing shame on Islam: “Through ‘Not in My Name’, I’ve been able to express my total solidarity with all those who love life,” she added.

Faced by terrorist groups who want to appropriate Islam, “it’s important for us as citizens to have our voices heard from Morocco, to say simply that we, the young Muslims of this country, are against terrorism,” commented Naima Mellaoui, a secretary at a communications agency.

“I’m a Muslim and I’m proud of that. That’s why I can’t accept that fanatics should commit atrocities in the name of my religion and kill in my name… I’ll never accept that,” insisted Kamal Alfatih, a high school student.

His friend Chouâib felt the same way: “We’re all ‘Machi Bessmity’, because we reject the idea that killing and horrible crime should be committed in our name and in the name of Islam, which is a religion of peace and love.”

As Casablanca imam El Haj El Mokhtar said: “We have a responsibility to defend the real values of Islam.” [Original Story]