Beginning Friday, October 24, The Atlantic Dialogues will bring together more than 350 leaders from the public and private sectors in Marrakesh for three intense days of informal, open discussions on issues affecting countries that border the Atlantic Ocean – Europe, North and South America, the Caribbean, and Africa. The event is jointly hosted by the German Marshall Fund (GMF) of the United States and the OCP Policy Center, a think tank supported by the OCP Foundation.

It is Modeled after GMF’s Brussels Forum, and participants include senior leadership from government, business, NGOs, media, influential personalities, and others who collaborate through interactive panels and focused smaller sessions on topics addressing “some of the region’s current challenges through both traditional and non-traditional partnerships.” Among the confirmed speakers are public and private sector delegates from Holland, the UN, World Bank/IMF, Togo, the European Commission, Costa Rica, the European Parliament, Science-Po University, Colombia, USAID, and Senegal.

The agenda for the meeting is deliberately structured to ensure the maximum opportunity for dialogue and exploration of perceptions and perspectives among the participants/ The goal is to encourage constructive deliberations on how challenges throughout the region can be addressed collectively by innovative initiatives and partnerships. According to the program’s planning document, “Specifically, Atlantic Dialogues will examine how the nations of the Atlantic Basin can work jointly to realize shared objectives, such as accelerating growth and enhancing living standards, using technology and innovation to bridge development, while addressing current and emerging threats and issues relating to immigration, security, health, trade, energy, governance, and climate, among others.”

To drive these discussions toward concrete proposals, Atlantic Dialogues has enlisted global partners from outside the region to discuss their shared interests and identify potential for collaboration utilizing a broad range of partnerships, including international organizations, NGOs, businesses and industries, think tanks and universities, and other groups.

A significant portion of the program will feature participants from The Emerging Leaders Program, which affords rising leaders the opportunity for advanced training in leadership skills followed by participation in the Atlantic Dialogues. This is a clear priority for the OCP Policy Center which, through its Young Leaders Program and other training/mentoring programs, contributes to the development of the next generation of Moroccan and African leaders in the public, corporate, and civil society sectors. 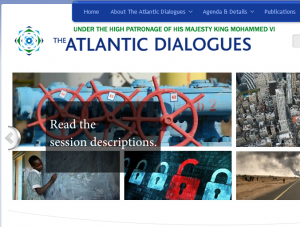 Held in a discussion format, with featured speakers as well as discussants, the event’s breadth and scope is illustrated by the program topics. From its initial session on “The New Atlantic Equation: Convergence, Cooperation, and Partnerships,” to current challenges such as “Confronting Zones of Chaos,”  “Governing the Atlantic,” and “New and Old Challenges in Health Security,” participants will discuss both issues and possible remedies. Technology, agriculture, e-government, development financing, sustainable cities, gender concerns, and new energies are some of the other major topics to be reviewed.

This is the third annual meeting, and it is an indicator of Morocco’s maturing intellectual environment that the Atlantic Dialogues has already become an important forum for regional and international exchanges. As the program notes, “The third edition of The Atlantic Dialogues will build and draw on the discussions and networks established in the previous two years and will provide an opportunity for policymakers to debate the changing dynamics across the wider basin and develop concrete solutions to specific regional policy.”

While many of the Atlantic basin countries struggle to build sustainable, inclusive, national development strategies, GMF and Morocco are providing a top tier forum for moving beyond crisis to concrete policies for achieving equitable growth.