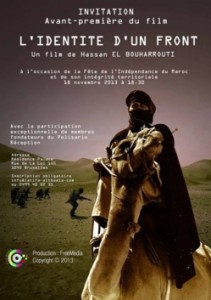 On Wednesday, October 29, the Leadership Council for Human Rights presented a screening of “The Polisario: The Identity of a Front” at West End Cinema in downtown Washington, DC. Directed by Moroccan-Belgian journalist Hassan El Bouharrouti, the documentary surveys the history of the Sahrawi separatist movement known as the Polisario, from its creation in 1973 by Sahrawi students fighting the Spanish occupation of the Moroccan Sahara to the present conflict between Morocco, the Polisario and its Algerian supporters. Using archival footage from the French National Audiovisual Institute and with testimonies from some founding members of the Polisario, the documentary explores the political and strategic issues that created the four-decade long conflict over Western Sahara.

At the event, Mr. El Bouharrouti and Producer Latifa Aït-Baala, who both came in from Belgium for the occasion, introduced the film and answered audience questions following the screening. MOTM caught up with the two before the show for a brief interview. (Note that the interview was conducted in French and has been translated.)

Morocco On The Move: What got you interested in the topic of the Western Sahara?

Hassan El Bouharrouti: I had left Morocco after getting my Baccalaureate and studied and lived in Belgium after that. I ended up working at the audiovisual service at the European Commission in Brussels. I found myself working with people from lots of countries from the Mediterranean area, including Algerians. We worked a lot on Morocco, and I remember my Algerian colleagues were very harsh on Morocco. I didn’t understand why, especially with regard to the Western Sahara. I didn’t even know where Dakhla and Laayoune were. That’s what got me interested in the topic and I began researching and trying to understand the situation. I discovered it was a fascinating and very complex issue, and I wanted to make of it my life’s passion.

MOTM: What pushed you to make a film on the topic, and how did you first get started?

HB: Until ten years ago even Moroccans in Europe were misinformed about the Western Sahara. I thought that we really need to educate people about the reality of the Western Sahara. I began with my own means—I had my own audiovisual company, and decided to do a “test run” with a documentary on the history of the Green March. During vacations, I took my camera and went to Morocco—to Laayoune, Dakhla, Rabat— to meet with people to talk to us about the Green March.

[When we finished the film] we organized a huge screening in 2010 in Brussels. Three thousand people came to the screening. Young people—young Moroccans—came up to me and said how they hadn’t known anything about the Green March, this peaceful movement of 350,000 unarmed people to recover the Western Sahara from the Spanish! It was such a historic moment, and I realized that young people really needed to know what their ancestors and previous generations had done for their country.

I decided that if with this little documentary I had managed to elicit the patriotism of Moroccans, why not continue? A few months later, I decided to work on a film about the Polisario and the origins of the Western Sahara conflict.

MOTM: What do you think were the main misconceptions?

HB: So few people know that the Polisario originated in Morocco. That it was created in Rabat. We discovered that there is so little information on the topic, a lot of contradictory information, especially since there are so many players—Morocco, Algeria, France, Spain, Mauritania…

Latifa Aït-Baala: I’m a jurist in international law and was lucky enough to join the Human Rights Commission at the EU. And I saw there that the Western Sahara question was systematically only ever discussed from a humanitarian dimension rather than political dimension. It was a constant debate on human rights when in fact the Western Sahara issue is much larger than that. And we saw that the Polisario had managed to gain the sympathy of many people who simply did not know the true history of the Western Sahara conflict.

HB: Yes that’s another fundamental misconception. The truth is that if the Polisario was serious about its claims about wanting independence and representing the Sahrawi people it wouldn’t have waited 40 years with multiple generations living in tents. And if Algeria was serious about housing and caring for these refugees— then couldn’t Algeria construct a city, or let them live in cities throughout Algeria? Give them a dignified life? But that’s how they operate. The Polisario works on this image of victimhood. If there was ever a state, the Polisario would be the losers.

MOTM: What was your favorite scene? Or what surprised you the most during filming?

LB: The interview with Mohamed Abdelaziz’s father [who lives in Morocco and is a retired member of Morocco’s Royal Armed Forces] is key. I almost want to say that this single interview should be enough to discredit the entire strategy of the Polisario.

But of course there’s the humanitarian aspect of the conflict. The [interviewees] who had been deported to Cuba by the Polisario and who finally are reunited with their families. It brings tears to the eyes.