King Mohammed VI of Morocco, in his annual Green March speech, marking the non-violent march of 350,000 Moroccans into the Southern Provinces of Morocco on November 6, 1975, hammered away at those who challenge the territorial integrity of his country. When his father, King Hassan II called for this historic march, it was to demonstrate decisively that Morocco was linked historically and culturally to what was then called the Spanish Sahara, and King Hassan acted to bring that reality home to the international community.

Today, control over that territory, variously referred to as the Western Sahara, the southern provinces, or just the Sahara, remains a contentious issue now squarely in the lap of the UN Security Council, which annually decides the fate of its observers in the region. While negotiations have not succeeded in closing the gaps between the protagonists, Morocco and its friends on the one hand, and the Polisario Front and Algeria on the other, the King reaffirmed that the outcome was already clear to him – that the southern provides were then and will always be part of Morocco.

King Mohammed was quite passionate about Morocco’s position on the Sahara, sweeping away those who claim that the inhabitants of the region – the Sahrawis – are somehow not Moroccans at all. As he has done consistently, the King stressed the multicultural identify of the Moroccan people. “Moroccans are the product of authentic cultural interplay between all the components of the Moroccan identity. As far as I am concerned, they are all equal; there is no difference between a Jebli and a Riffi – between a Sahrawi and a Soussi…,” referring to various regions of Morocco.

Before assailing his critics, King Mohammed spoke briefly regarding his vision for the Sahara, which, in 2015, will be the proving grounds for a regionalization process that will devolve a great deal of administrative power to local elected officials and councils. “…the type of regionalization I wish to see achieved is based on this richness and on this human and natural diversity. It consolidates this intermingling, solidarity and complementarity between the sons and daughters of one and the same nation as well as between all its regions.”

King Mohammed Fires Back at those Opposing Autonomy Plan 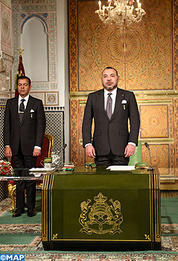 The King was clearly irritated by those who have ignored the great investments that Morocco has made to bring the southern provinces the benefits of a modern state. “Forty years of sacrifice have gone by during which our aim was to recover the land, free the people, make sure our fellow citizens in the Sahara enjoy a dignified life, win their hearts and consolidate their bonds with the homeland.”

The King challenged the dust storm created by Morocco’s opponents to discredit its role in the territory. He spelled out how the southern provinces have benefited, even though it has been a strain on the country’s resources. He noted that Morocco has invested in the south seven times what it receives in revenue. “As for human development indicators in the region in 1975, they were 6% lower than in northern Morocco, and 51% lower than in Spain. Today, those indicators are much higher in the southern provinces than the national average. Therefore, let me say this, loud and clear: stop spreading false allegations that Morocco is exploiting the region’s wealth!

For those who claim that Morocco is exploiting the territory, the King had a ready reply. “It is a fact that what is produced in the Sahara is not even enough to meet the basic needs of its population. Let me say this, in all sincerity: Moroccans have borne the cost of developing the southern provinces. They have paid out of their own pockets and given from the earnings intended for their children so that their brothers in the south may lead a dignified life as humans.”

As if to challenge these critics even further, the King remarked that, “Everyone knows that Morocco is keen to ensure that the region’s population benefits from the local wealth, in an environment where equal opportunity and social justice prevail.” This point is especially relevant in the often ill-informed debate about the existing and potential on and off-shore resources in the Sahara.

Although his speech was directed at critics who challenge Morocco’s rule over the southern provinces, the King did not shy away from his own critiques of how the territory had been administered. “It is true that the governance system in the Sahara was marked by certain malfunctions​​ which, over the years, led to a rentier economy and to undeserved privileges. This has given rise to resentment and to a growing sense of injustice and exclusion among some segments of the population.” It is to this end that the Economic, Social, and Environmental Council (CESE), under a mandate from the King, conducted a year-long assessment that resulted in far-reaching reforms and human development projects for the south totaling some $17 billion over 10 years.

King Mohammed had no use for those who abuse their positions in the South by exploiting their positions. “I know only too well that there are people who serve the nation sincerely and with dedication, and there are others who use the nation to serve their own interests. For these people, extortion has become a deep-rooted doctrine; they have turned rent-seeking and privileges into an indisputable right and have abused the national cause to serve their own interests. I am also aware that there are people who want it both ways: they side with the homeland if they reap benefits; and with its enemy if they don’t.”

He adamantly refuted their double standards. “I say: That is enough of this rentier policy and privileges! Stop earning a livelihood at the expense of the homeland! Therefore, to be fair to all our fellow citizens in the Sahara and to the silent majority which believes in the nation’s unity, let us radically reconsider the governance system in our southern provinces.” 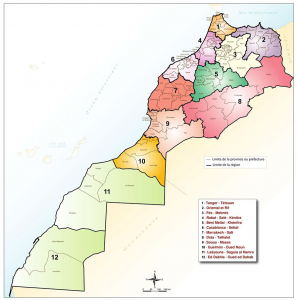 He went on to describe “My decision to implement advanced regionalization as well as the development model in the southern provinces is part of that endeavor. Our goal is to break with the previous system of governance and to enable the inhabitants of the region to participate in the management of their local affairs in a transparent, responsible way, making sure equal opportunity is guaranteed.”

To this end, I call for an open, candid national dialogue and for debate on different ideas and visions in a dedicated, responsible manner in order to come up with clear answers to all the issues and concerns that are on the local population’s mind, making sure this is within the framework of the country’s national unity and territorial integrity.”

As if anticipating sporadic concerns regarding human rights in the south, the King was quite forthright. “The international community acknowledges that Morocco has committed credible mechanisms and institutions that can deal with human rights issues. Moreover, Morocco is the only country in the region which cooperates with the Special Procedures of the United Nations Human Rights Council.

Perhaps not well known is that the country welcomes those who would report on human rights. “Morocco is also willing to be more open to all international human rights bodies and organizations which abide by the principles of neutrality and objectivity in dealing with Moroccan issues. My country rejects the policy of belittling its initiatives and of amplifying events occurring in the southern provinces, while saying nothing and acting in collusion with regards to events in Tindouf and the neighboring countries.”

In closing, King Mohammed returned to the centrality of the autonomy issue. “The autonomy initiative is the maximum Morocco can offer in terms of negotiation to achieve a final solution to this regional conflict. Conversely, Morocco is ready to cooperate with all parties to reach a solution that respects its sovereignty that is face-saving for everyone and that contributes to consolidating security and stability in the region and to the achievement of Maghreb integration.”

He left his last salvo for those leaders who are ambiguous in their position on autonomy. “At a time when they reaffirm that Morocco is a model for democratic development, an influential state in ensuring security and stability in the region and a partner in the fight against terrorism, there is some ambiguity in the way they deal with the question of its territorial integrity.”

For the King, it is clear. The Green March continues – at the UN, in the corridors of the Security Council, and with the international community. Morocco has gone the extra mile by offering autonomy and is moving ahead with regionalization as a template for granting greater control to citizens empowered to run their own affairs. It is time for the US and Morocco’s friends on the Security Council to make this a reality.