Participants cite opportunities to exchange and grow from interactions 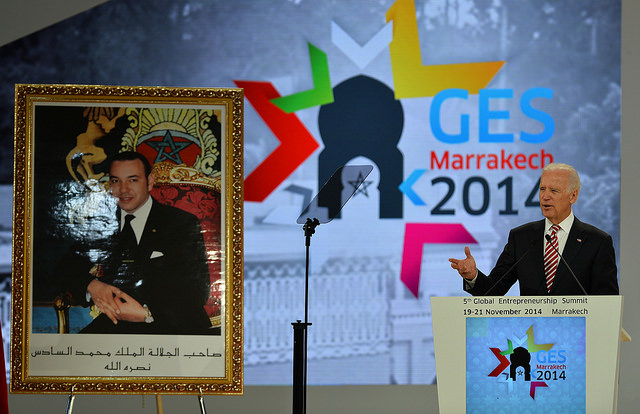 In his keynote speech to the fifth annual Global Entrepreneurship Summit in Marrakesh last week, Vice President Joseph Biden set the tone by tying the goals of the Summit to three themes: the critical importance of a fair and effective educational system, the need to empower women as entrepreneurs, and the key role that entrepreneurism can play in reducing corruption and promoting stability and good governance. “Around the world we work to connect entrepreneurs. This includes promoting transparency and fighting corruption,” he said. “It takes a universal education system, a value system that gives people the freedom to try and fail, and a society that empowers women, because without empowering women, everything else we want to achieve is exponentially harder.”

As reported in the international media, a number of new investment and development initiatives were announced at the Summit:

The partnership between the US and Swedish automobile manufacturer Volvo will have two components: establishing a training academy for entrepreneurs in Morocco that will prepare students to either fill needed jobs in the market or start their own businesses; and specialized technical training on industrial and commercial equipment maintenance for 150 students a year from Morocco, Ivory Coast, and Senegal.

Similarly, the US-Spain financing of a state-of-the-art cold-storage facility at Tangier-Med will support the expansion of Morocco’s agricultural value chain, resulting in growing exports and more jobs.

This theme was echoed by US Commerce Secretary Penny Pritzker in her remarks, when she pointed out that “governments in the region were coming around to the importance of entrepreneurship as a way of employing the masses of young people not finding work in the current economies. “We have heads of countries who have gone from no understanding of entrepreneurship to how do we do it the way you do it in the United States,” she said. “What they see is job creation, greater economic growth potential, security and stability, not allowing idle minds to find trouble.”

Reflections of a Speaker and an Entrepreneur

While these priorities and projects demonstrate the commitment of the US and Morocco, much more was achieved at the Summit, according to several attendees. Marilyn Diamond, Honorary Consul of Morocco in Chicago, said that “One outcome is that Morocco has created thousands of new Ambassadors. People I spoke to were blown away by the beauty, hospitality, and openness, of Morocco, as well as its stability, sophistication, and contrast in general to what they thought about or experienced in other Muslim countries.”

According to Moises D. Santana, professor, entrepreneur, and author, “GES2014 served as a platform to Africa, the same way that GES2013 [held in Malaysia] did with regards to Asia. The ‘marketplace’ (the space where entrepreneurs connected physically and virtually to each other) worked very well. There were hundreds of interactions and meetings. However, I think that the best thing they got from it was not a commercial agreement, but the chance to embrace the ‘inspiring spirit of everything is possible,’ and ‘we must work together to do something big.’ They realized how important it is to meet different people, with different expertise or backgrounds, who shared with them the same expectations, dreams, and desires. They came away with the ‘energy’ and ‘passion’ of somebody who realizes that their future may depend on themselves, and they left with many ideas and higher expectations than when they registered.”

When asked about the outcomes of the Summit, Dr. Santana mentioned that “Morocco perfectly understood that it could also replicate this strategy and lead the promotion of entrepreneurship toward Africa. The first that arrives, wins the prize. Entrepreneurs from around the world really enjoyed the experience and met inspiring and passionate people with plenty of ideas. Moroccan entrepreneurs were happy to be there and grateful for having the chance to be there. They also felt proud that Morocco was hosting the event. Nobody talked about politics, but about building up projects, collaborating, sharing ideas, and prospering.”

The Summit was the first held in Africa and the first held in a frontier market. It grew out of conversations between President Obama and King Mohammed VI, and was announced during the King’s visit to Washington, DC in late 2013. Morocco’s partnership with the US is emerging as a key component of US strategy in the region, and the Summit is a prime example of the benefits beyond security agreements that can be achieved between these friends.