Much has happened in 2014 for Morocco and the US-Morocco relationship. From the second meeting of the Morocco-US Strategic Dialogue to the Global Entrepreneurship Summit in Marrakech to important acts of Congress, here’s a look at some of our favorite 2014 highlights before we ring in the new year.

In March, Morocco’s Council of Ministers, chaired by King Mohammed VI, announced its decision to pursue expansive reform of Morocco’s military justice system, which would include ending the use of military tribunals to try civilians. Driss el Yazami, President of Morocco’s respected National Human Rights Council (CNDH), called the new law “a major step towards strengthening the rule of law, reforming the judiciary, and protecting human rights.”

In April, Secretary of State John Kerry joined his Moroccan counterpart, Foreign Minister Salaheddine Mezouar, in Rabat to co-chair the second meeting of the Morocco-US Strategic Dialogue. In opening remarks for the meeting, Kerry hailed Morocco’s leadership on reforms as well as security and stability in the region. “The United States stands by and will stand by this relationship every step of the way,” he said.

That same month, at a House hearing on US policy toward Morocco, key members of the Foreign Affairs Committee reiterated the United States’ commitment to supporting Morocco through its ongoing democratization and praised the North African country as a model for moderation and a strategic ally.

July 31 marked the 15 year anniversary of King Mohammed VI’s reign. Marking the occasion, the King delivered a speech taking stock of the progress made to improve the lives of Moroccans, continue ongoing reforms, and strengthen the country’s partnerships with the US, Europe, Africa, and the Middle East.

In August, more than a dozen high-ranking Moroccan officials and business leaders made a strong case for Morocco’s key role in promoting economic development and stability in Africa at the US-Africa Leaders Summit in Washington. The Moroccan delegation attended more than 70 events that resulted in a number of public statements and signed agreements in the areas of business, education, counterterrorism, and more.

In September, the Global Counterterrorism Forum (GCTF) previewed a number of new counterterrorism initiatives in which Morocco will play a central role. “I want to thank our colleagues from Morocco and the Netherlands for spearheading the forum’s effort to develop the first global set of good practices on stopping the flow of foreign terrorist fighters, which we will adopt here today,” said US Secretary of State John Kerry in opening remarks at the Forum. 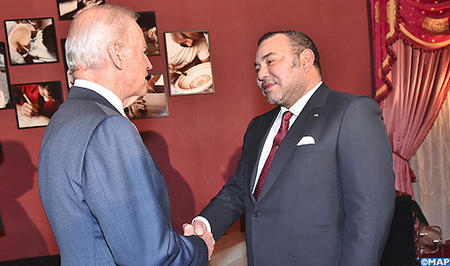 In November, Vice President Joseph Biden met with King Mohammed VI in advance of the opening of the fifth Global Entrepreneurship Summit in Marrakech. The event brought several thousand entrepreneurs from around the world to Morocco for three days of workshops and meetings (and a vice-presidential birthday serenade).

And earlier this month, the 2015 Appropriations Bill passed by Congress and signed Tuesday night by President Obama included a strengthened mandate requiring that US assistance designated for Morocco be used in the Western Sahara. The bill puts into action the “shared commitment to the improvement of the lives of the people of the Western Sahara” made in the Joint Statement that followed President Barack Obama’s and King Mohammed VI’s November 2013 White House meeting.

For more 2014 headlines, check out our Press Page.

Wishing You and Yours a Wonderful New Year!