Morocco, planning to have 42% of its energy come from renewable sources by 2020, is part of a surging green energy industry in the Middle East and North Africa: 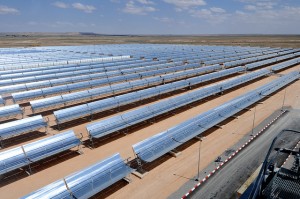 “The growth potential [for renewable energy] in Mena is unlimited. It can go to very high percentages of PV, solar thermal and wind,” says Paul van Son, the former head of DII, who is now co-ordinating RWE’s renewables activities in the Middle East and Turkey. “All our surveys show that in 30, 40 years, Mena countries can make almost 100% of their supply renewable, emission free. Definitely, these countries in the coming decades will show a very fast growth.”

Renewable-energy production in Morocco, which aims to have 2GW of solar by 2020, got a shot in the arm late last year when the World Bank rubber-stamped a $519m finance package for the 350MW second phase of the concentrating solar power (CSP) plant under construction in Ouarzazate. The first phase of the project, being built by Saudi Arabia’s ACWA Power under a so-called BOOT (build, own, operate and transfer) contract where ownership will eventually be handed back to the Moroccan government, is due for completion this year. Contracts to build the 150-200MW Noor 2 and the 100-150MW Noor 3 CSP plant are expected in the coming months.

Wind is picking up in Morocco too, highlighted by Energie Eolienne du Maroc’s recent order of GE turbines for a 100MW project in southern Morocco that is part of a 720MW first phase of the government’s plan to install 2GW of wind by 2020…[Full Story]