As oil prices plummet, many countries are beginning to question their energy strategy. Oil at $50 per barrel creates nearly as many geopolitical and economic problems as oil at $150 per barrel. Whereas expensive oil puts a major strain on trade and budgets, especially punishing energy importers, cheap oil wreaks havoc on oil exporting countries as well as private companies and investors in the energy industry. In the case of Morocco, a long-term energy strategy has already improved access and energy independence, with a focus on the country’s inherent strengths in green energy production.

For several oil producing countries, the counterintuitive decision to encourage the current price drop through boosted exports is aimed squarely at new sources of surging production, where new drilling methods have spurred a wave of investment and competition. The low price is precisely intended to punish those investments by minimizing their profits on oil sales. Although this strategy isn’t wholly responsible for the oil price, it will continue exerting a downward force in the short term, and it’s difficult to predict when prices will rebound.

In the meantime, the World Bank recently reported that “the fall in oil prices provides a window of opportunity to undertake fiscal policy and structural reforms” as a result of potentially big budget relief for developing country energy importers. Countries that typically spend a great deal on energy subsidies could find that burden diminishing and have unanticipated funds for other critical development needs. Problematically, nobody knows just how long this window will last and if it will be enough to finance new structural reforms.

Regardless of how oil prices fluctuate, Morocco has put itself in a good situation. Structural reforms in the energy sector began decades ago. The first goal was expanding access to electricity, as only 18% of the population was connected to the power grid in 1995. Twenty years later, 98% of Moroccans are connected. This massive increase in usage, coupled with new demands via economic growth, added tremendous fiscal strain for Morocco, which imported 95 percent of its energy needs as recently as 2011 – the highest in North Africa.  The stakes are extremely high to make energy consumption and expenditure more sustainable.

In 2009, Morocco began a new National Energy Strategy to promote domestic sources of energy (especially renewables) and improve overall efficiency. More and more, this decision is yielding results, and Morocco is giving itself an increasing number of options. To better utilize fossil fuels, Morocco has invested in infrastructure via Liquefied Natural Gas (LNG) and high-efficiency coal plants to improve reliability and competition among suppliers. Recent news about the potential for domestic shale gas and oil production could furnish even bigger results, as “energy majors have begun targeting the country’s potential reserves.”

Morocco is also wholeheartedly committed to renewables – by 2020, the country aims to have 42 percent of its energy from green sources. More than simple platitudes, solar and wind energy in particular offer the compelling possibility of top-to-bottom domestic energy production. “Green is the new black” in the MENA region and Morocco is leading the charge by attracting massive private and public investment in big green energy projects. Energy production from non-hydroelectric renewables in the country more than doubled from 2008 to 2010, as renewables jumped from 6 percent of Morocco’s energy production to 17 percent, with an accompanying decline in electricity production from oil, gas, and coal (according to World Bank data). Just last month, the African Development Bank approved financing for the second phase of what will become the largest solar power station in Africa. Phase one of this project is scheduled to begin operating this year, with four additional plants slated to be operational by the end of this decade.  Morocco is even eyeing green energy exports to some European and African neighbors. 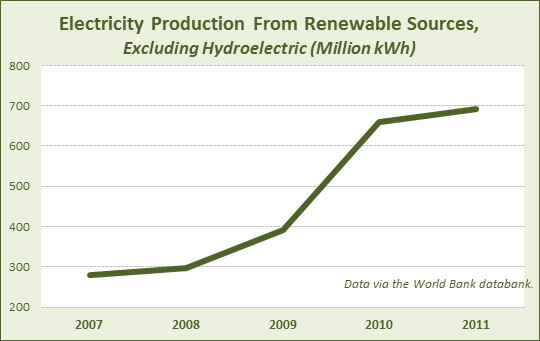 Elsewhere in the region, the sustained commitment to renewables has been lacking. The World Bank hopes that countries will take advantage of the oil price relief by reforming fiscal and energy policies. Meanwhile, Morocco is demonstrating the value of a long-term approach to reform and investment that preceded the oil spike. The changing oil price will not dissuade Morocco from its commitment to investing in energy independence and efficiency, nor will it hinder Morocco’s leadership on green energy, because its strategic goal is well beyond seeking temporary relief. It is about sustainable and responsible development.

“Under political guidance from the highest level, Morocco has shown an admirable determination to play to its strengths, and in our view the National Energy Strategy set out in 2009 has taken Morocco very much in the right direction,” according to a 2014 analysis made by the International Energy Agency at the request of Morocco. The oil price will eventually rebound, and while many countries will ignore the opportunity to reform, Morocco will enjoy significant benefits from having already done so.