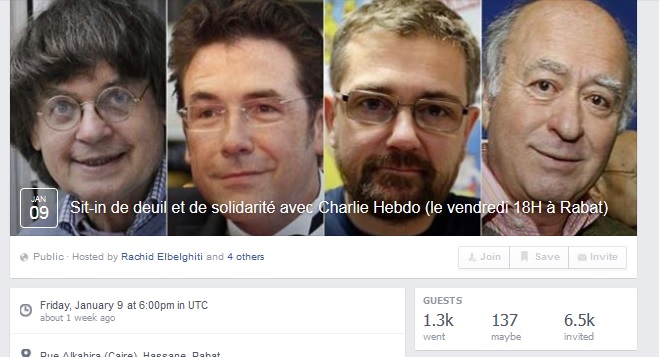 After one of France’s deadliest terrorist attacks that left 17 dead, including 10 journalists, 3 police officers, and 4 shoppers at a Kosher supermarket, the world rose to denounce this vicious massacre, and all acts of terrorism. Morocco was no exception.

In a letter to French president Francois Hollande, King Mohammed VI firmly condemned this cowardly act of hatred, sent his condolences to the families of the victims and the entire French people, and expressed his profound grief for the loss of the victims.  Morocco’s Chief of Government, Abdelillah Benkirane, also denounced the terrorist attack in a letter to French Prime Minister Manual Valls. Benkirane wrote that he was “outraged” by the criminal and terrorist act that targeted French citizens and denounced “this atrocious attack.” 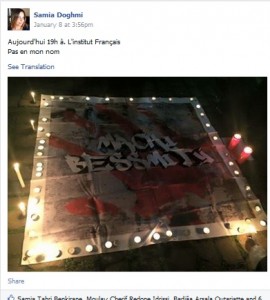 “Not in my name” banner

The executive branch was not alone in expressing its outrage in Morocco. Professional unions, especially those involved in the press industry, also expressed their support for the victims’ families and fiercely condemned the attacks. The Moroccan Federation of Newspaper Publishers published a statement in which it shared “the grief of colleagues and families of the victims and strongly condemned this criminal operation, which not only targeted a specific newspaper or editorial line, but freedom of expression and press all over the world.” The Federation also condemned “extremism in all its forms and obscurantism, which in its most extreme form becomes terrorism aimed at freedom and life.”

Moroccan civil society also rose to denounce the attacks, staging solidarity sit-ins held nationwide on the weekend following the attack. In Casablanca, Morocco’s largest city and economic capital, two sit-ins were held, one January 8 at the French Cultural Institute, and the other on January 10 in front of the French consulate. 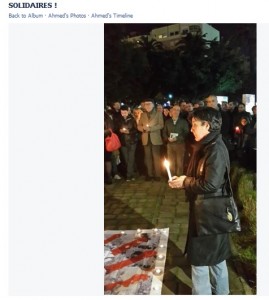 At the French Cultural Institute, around 200 people, including Moroccan and French journalists, intellectuals, and activists, gathered to denounce terrorism and barbarianism, and convey their support and compassion for the victims’ family and friends. One of the most notable people at the rally was Soad Begdouri El Khammal, an activist whose husband and son died in the May 2003 terrorist attacks in Casablanca.

Morocco’s largest sit-in – held in silence – was in front of the French news agency AFP’s Rabat offices on January 9. More than 500 people, including politicians, journalists, and artists, wearing black and holding candles, gathered to pay their respects to the victims, express their support to the victims’ families, and stand united against terrorism. 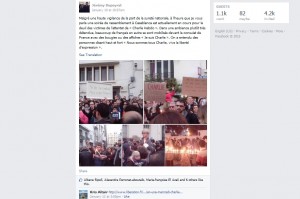 Though many Moroccans do not agree with the way Charlie Hebdo depicted Islam, their position on violence and terrorism was unshaken.  The quote of famed French philosopher and writer Voltaire, “I do not agree with what you have to say, but I’ll defend to the death your right to say it,” in fact appeared on many posters waved at the sit-ins in Morocco. Terrorism knows no ethnicity, religion, nationality, or language; it affects every single one of us. Moroccans’ overwhelming condemnation of the terrorist attacks serves to remind us that no matter what our beliefs or disagreements are, we should all stand united in denouncing terrorism.

Ms. Layadi is a research assistant at MAC and a native of Morocco.
More Articles
Follow