Exciting results from the study of a meteorite found in Morocco: 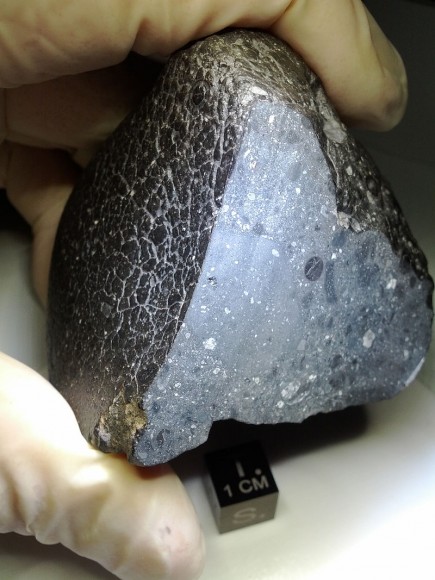 Mars is often referred to as the Red Planet. But its signature color is only skin-deep – or, I should say, dust-deep. Beneath its rusty regolith Mars has many other hues and shades as well, from pale greys like those found inside holes drilled by Curiosity to large dark regions that are the result of ancient lava flows. Now, researchers think we may have an actual piece of one of Mars’ dark plains here on Earth in the form of a meteorite that was found in the Moroccan desert in 2011.

Classified as NWA 7034 (for Northwest Africa) the meteorite is a 320-gram (11 oz.) piece of Martian basaltic breccia made up of small fragments cemented together in a dark matrix. Nicknamed “Black Beauty,” NWA 7034 is one of the oldest meteorites ever discovered and is like nothing else ever found on Earth.

According to a new study on a fragment of the meteorite by researchers from Brown University in Providence, Rhode Island and the University of New Mexico, Black Beauty is a 4.4-billion-year-old chunk of Mars’ dark crust – the only known piece of such to have landed on Earth…[Full Story]