Over the past five years, Morocco has benefited from a strong working relationship with the World Bank and other multilateral agencies, such as the International Monetary Fund. This is largely due to Morocco’s aggressive economic and financial reform package, which is still unfolding as the country seeks to reduce the drag of subsidies and public expenditures on growth prospects and promote greater access to global markets and investors.

While other Arab countries saw their growth stymied in the aftermath of the global financial crisis in 2007-2008 and then endured the shocks of the Arab uprising beginning in 2011, Morocco adopted an aggressive reform program to counter any declines. The first step was recognizing that European recovery would likely not attain previously high levels, so strong medicine was required. After all, the EU countries accounted “for 65 percent of Moroccan exports, 70 percent of the tourists visiting the country, and 75 percent of workers’ remittances,” according to a report published by the Atlantic Council.

Turning south, King Mohammed VI ratcheted up his regional economic integration strategy with African countries, visiting key capitals, promoting a range of cooperation agreements, and investing his political capital in strengthening political, economic, and social relations. While some of these steps were aimed at building stronger security ties in light of growing extremist threats, the overall goal of these efforts continues to be strengthening regional opportunities for mutual prosperity.

In addition, economic reforms are being pursued to make Morocco more globally competitive, with a highly skilled workforce, and a strong middle class to serve as a backbone of energetic and entrepreneurial companies that generate badly needed jobs. To make this happen, subsidies are being reduced, inflation is contained, and what subsidies remain are being shifted to target those with the greatest need.

Tackling unemployment remains tough without further labor reforms and more creative engagement of the informal sector, which now approaches 50 percent of the official GDP. And land ownership questions continue to bedevil foreign investors. Yet all these issues, and streamlining the government bureaucracy and regulatory regimes, are clearly in the crosshairs of the government’s reform initiatives.

Morocco and the World Bank

As Simon Gray, World Bank Country Director for the Maghreb said in the press release announcing the loan, “Morocco made good headway in improving its overall competitiveness framework and carrying out business environment reforms. Yet bolder reforms, and further diversification of the Moroccan economy, will help set the country on a stronger path to join other emerging countries.”

In 2004, the World Bank began publishing its annual Doing Business report, attempting to evaluate, and eventually rank, regulatory schemes in the world’s economies and promoting regulatory reform. Initially measuring solely the regulations for business creation, the rankings have spread to include several other areas of regulation, including contract enforcement and cross-border trade. Some countries have taken the hint and pursued recommended reforms, while others have ignored them and even added burdensome regulations.

Morocco has been one of the world’s better Doing Business reformers. Since the World Bank started tracking reforms in 2008, Morocco has enacted positive reforms in every single year going up to the recent 2015 report. By 2012, Morocco was listed as the top reformer in the world, “by simplifying the construction permitting process, easing the administrative burden of tax compliance, and providing greater protections to minority shareholders.”

As a result of these reforms, Morocco has not only steadily climbed the rankings, but it has also become a regional leader in business-friendliness. Morocco has lowered the number or procedures and days it takes to start a business, and made huge progress in improving access to construction permits, simplifying tax payments, and contract enforcement. Morocco has leveraged regulatory competition within the country–with localized regulatory schemes based on regions–to encourage this reform.

Beyond rankings, these reforms bring results. Morocco’s business environment has attracted big Foreign Direct Investment (FDI). According to an African Development Bank report, “Morocco alone was able to attract 25% of all FDI going to North Africa…[and] according 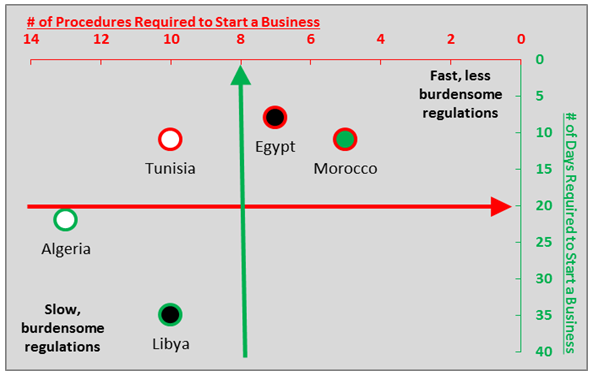 to FDI Intelligence…Morocco became the second most attractive country for FDI in Africa in 2013-14, attracting 8.3% of all such flows to the continent.” Even better, Morocco has channeled this FDI into jobs and development, focusing on growth sectors such as automotive and aeronautical manufacturing.

Morocco can still improve. Registering property and resolving insolvency could be easier, and efforts to boost the number of entrepreneurs must be better coordinated and scaled up. The entire region has witnessed the role that large-scale unemployment plays in stability, making it crucial that long-term strategies to fortify the private sector and boost investment are implemented and sustained. Morocco has demonstrated a clear intention to continue reforming the business environment, and the recent news from the World Bank shows that the rest of the world is convinced; Morocco is open for business.