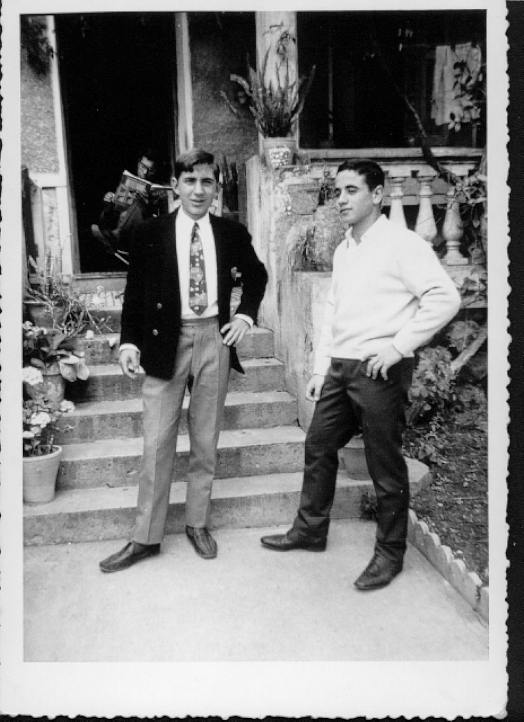 At left, Charlie Dahan, current Vice President of the World Federation of Moroccan Jewry, in Meknes.

MOTM interviewed Dr. Schroeter following the lecture on the history of Morocco’s Jewish community, King Mohammed V’s actions during World War II, and the state of the Jewish community in Morocco today. Here’s what he had to say…

DJS: What is particularly fascinating about the Jews of Morocco is their very long history of two millennia, and their cultural diversity. Morocco, situated in the Western Mediterranean, was at the crossroads of many civilizations: Andalusian and Hispanic, Arabic, Amazigh (Berber), as well as the cultures and traditions of the Sahara and West Africa.

Moroccan Jews, much like the Muslim population, reflected this cultural diversity. Morocco developed a unique cultural synthesis in the period that followed the end of Muslim Spain, and the influx of the Hispano-Arabic Muslim and Jewish communities in the 16th and 17th centuries. Jews lived among and coexisted with the majority Muslim population in virtually every part of Morocco, from the larger cities such as Fez, Marrakesh, Meknes, Essaouira, Oujda and Tetuan (or Casablanca in more recent times), to the small towns and villages in the rural, predominately Berber-speaking regions of the High Atlas Mountains, Sous and Draa valleys, and the Tafilalet. While there were certainly other countries in the Arab world which had long histories of cultural interaction and coexistence between Jews and Muslims, perhaps nowhere else were Jews such an integral part of the cultural fabric in all its diversity.

MOTM: As noted in the lecture materials, “Sultan Mohammed Ben Youssef is venerated by many Moroccan Jews for protecting his Jewish subjects” from the French authorities. How do you explain the Sultan’s actions during World War II?

DJS: In the period before World War II, the nationalist movement was born which anticipated the call for independence after the war. The sultan was thinking about how he could eventually lead the country down the path to independence, but with limited powers, and dependent on the French for the continued existence of the monarchy, he had to tread cautiously and strategically. The coming to power of Vichy, of which the French protectorate became a part, and the anti-Jewish laws presented both a problem and an opportunity for the sultan to assert himself as national leader and to demonstrate his religious authority as “Commander of the Faithful” (Amir al-Mu’minin). As part of the system created by the colonial authorities, he continued to support France, since a revolt against colonial rule at this stage would have spelled the end of the dynasty. Yet the anti-Jewish laws were a challenge to his position as the sovereign ruler, which the French themselves recognized, because it threatened to undermine his ability, at least on a symbolic level, of safeguarding all his subjects, Jews as well as Muslim, and this was a challenge to national unity. And he understood very well that Jews were a vital part of Morocco.

MOTM: What is the legacy of the Sultan’s actions for both Moroccan Muslims and Jews?

DJS: [Beginning in] the 1970s the story of Mohammed V’s saving the Jews from catastrophe started to become a part of the collective memory of Moroccan Jews throughout their Diaspora in North America, Europe and Israel. It is a source of pride, important to their identity as being “Moroccan” no matter where they might live. For the monarchy and for some Moroccan intellectuals and public figures, Mohammad V’s defense of the Jews during World War II is also of great importance. It serves to represent Morocco as a country of tolerance and pluralism; a model for co-existence between Muslims and Jews.

MOTM: How would you describe Moroccan Jewish-Muslim relations both historically and today?

DJS: Relations of Muslims and Jews in Morocco were usually harmonious on a day-to-day basis. While they maintained boundaries as members of separate faith communities, they shared many aspects of a common culture. Yet one should avoid idealizing this co-existence, and recognize also that there were tensions in the relationship. This is no different from the kind of tensions and conflict that exist anywhere between majority and minority groups, between the dominant and dominated. Yet for someone who has devoted many years for studying this question, it is heartening for me to see how much concern there is among well-educated Moroccans for the importance of this very long Muslim-Jewish relationship and the cultural exchange that it entailed. One can only hope that knowledge of this long history of living together—in both harmony and conflict—will become a part of the education of all Moroccans. In the absence of all but a small remnant of once was such a large and vibrant Jewish community, an understanding of this relationship is essential for imagining a better future. It is in this sense that Jewish-Muslim relations in Morocco can serve as an excellent example that Muslims and Jews need not be thought of as implacable enemies.

Dr. Schroeter is the author of numerous studies on the history of Morocco and the Jews of the Islamic world. His books, Merchants of Essaouira (2009) and The Sultan’s Jew: Morocco and the Sephardi World (2002), have been translated into Arabic and published in Morocco.