Details and images from Morocco’s new training center for moderate religious leaders, which is currently training about 700 Imams, Morchidines and Morchidates from Morocco, North and West Africa, and Europe: 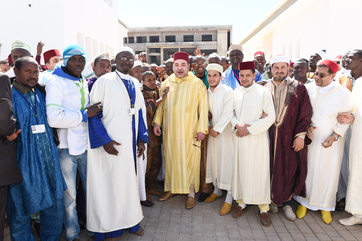 King Mohammed VI, Commander of the Faithful, inaugurated, on Friday in Rabat, the Mohammed VI Institute for the Training of Imams, Morchidines and Morchidates (religious preachers), a pilot project that will further enhance Morocco’s religious influence and anchor the Kingdom’s attachment to the precepts and fundamentals of Islam.

The new institute, completed for a total cost of 230 million dirhams, will offer training to Imams from Morocco, the Arab world, Africa and Europe.

The institute is, thus, an expression of the supreme role of the institution of the commandership of the faithful as a custodian of an authentic tolerant and open Islam based on the Ashaari doctrine and the Malikite School of jurisprudence.

The new institute is part of an integrated strategy aiming at inculcating to the new generations of Imams and preachers the values of moderate Islam as it has always been practiced in Morocco as a rampart against all forms of extremism.

The institute, to be based in the University area of Madinat AL Irfane, will complement other institutions in preserving Morocco’s religious identity and advocating the values of moderation, openness and tolerance.

Morocco’s integrated religious strategy rests on three pillars: institutions, efficient supervision and modern scientific training. The Mohammed VI Institute for the Training of Imams, Morchidins and Morchidates is part of the third pillar.

With 1000-seat capacity, the new institution stretches on a surface area of 28,687 square meters. It houses an amphitheater, class and computer rooms, a multipurpose hall and Al Oukhoua Al Islamia mosque as well as a library equipped with rich and diversified resources.

The Institute also has an accommodation and catering with 310 rooms (700 beds), two refectories and a wing for social and sports activities.

In addition to its role in preserving the spiritual identity of Moroccans and the unity of the Malikite school of jurisprudence, the institute will also serve to train Imams from other African sister countries such as Tunisia, Mali, Guinea Conakry, Cote d’Ivoire and European countries which request it.

Besides Moroccan students whose number stands at 150 Imams and Morchids and 100 Morchidates, the Institute is currently offering training to 447 foreign students (212 Malians, 37 Tunisians, 100 Guineans and 75 Ivoirians as well as 23 from France).

Built by the Endowments and Islamic Affairs Ministry, the construction works of the new edifice were launched on May 12, 2014 by the Sovereign…[Original Story, Subscription Required]