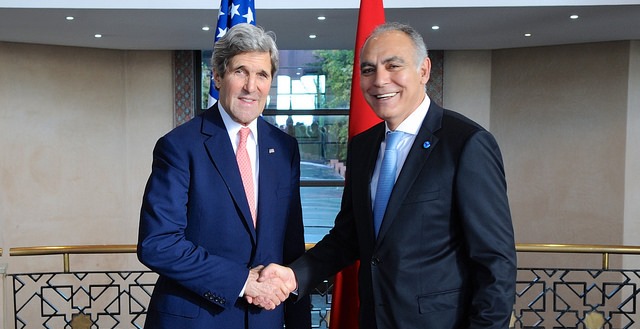 This coming week, Morocco and the US will hold the third bilateral Strategic Dialogue, which is an opportunity for the long-time friends to discuss key political and security issues. Initiated during the first Obama Administration by then Secretary of State Hillary Clinton, the Morocco-US Strategic Dialogue, one of less than two dozen worldwide, provides a framework for continued consultations and exchanges across a range of topics.

At the time, Secretary Clinton said “In many ways, the United States looks to Morocco to be a leader and a model.” She added, “I commend Morocco and your government for your efforts to stay ahead of these changes [Arab Spring] by holding free and fair elections, empowering the elected parliament, taking other steps to ensure that the government reflects the will of the people.” Secretary Clinton then went on to mention the importance of the efforts of the four working groups for defining mutual interests that span political, economic, cultural and educational, and security interests.

In the second Morocco-US Strategic Dialogue held in Rabat in April 2014, the US delegation was headed by Secretary of State John Kerry, who reiterated America’s commitment to the bilateral relationship. “We’re very, very grateful that Morocco has engaged the United States as a partner and as a friend from the very beginning of that initiative [Peace Corps]. And we take pride in what we’ve accomplished together and in the many ways that the bonds between our people have deepened.”

In the year since the last Strategic Dialogue, the US-Morocco relationship has continued to strengthen. Operation African Lion, featuring troops from eight countries, took place amid increased threats to the stability in the Sahel and the Middle East North Africa (MENA) region; the Global Entrepreneurship Summit, with more than 3000 participants, took place in Marrakech; Morocco inaugurated a region-wide training center for imams for building their understanding and promotion of moderate Islam; and Morocco increased its participation in the anti-ISIL coalition.

An important feature of the Strategic Dialogue from the Moroccan side is inclusion of NGOs and private sector representatives, providing a comprehensive team approach to the discussions. In the first two dialogues, large business delegations also attended, allowing time for B2B meetings and detailed conversations on topics that affect US-Morocco trade and investment opportunities.

While much of the region remains unsettled and on heightened security, Morocco is managing multiple agendas that will be addressed in the Strategic Dialogue in an environment of stability and progressive liberalization. First up, of course, will be concerns with terrorism and extremism. Discussions will be held by two working groups: security and cultural/educational. The first group will look at enhanced means of coordination and collaboration on three fronts: the anti-ISIL coalition, in which Morocco is playing a leading role; Morocco’s leadership in the Arab League’s newly formed joint operating force; and the country’s multidimensional effort to counter violent extremism (CVE). The latter topic will be addressed in the cultural/educational working group by Dr. Ahmed Abaddi, Secretary General of the Rabita Muhammadia of Ulamas, the senior council of religious scholars in Morocco. He leads the country’s CVE educational program, which features a strong and creative social media component. Dr. Abaddi will be joined by the country’s human rights and human development leaders.

On the business front, Morocco and the US will be looking to expand the impact and value of the Free Trade Agreement (FTA) to make it more accessible to Moroccan and American companies new to the bilateral opportunities in the FTA. Related topics include maintaining progress on intellectual property rights, export and import levels and enhancements, and other trade and investment related concerns.

A special area of interest, highlighted during the early March visit to Morocco of the Overseas Private Investment Corporation (OPIC), is building stronger ties in the renewable energy and project financing sectors. These sectors will be represented in the working group with their US counterparts to explore options for new private-public partnerships.

The Strategic Dialogue is a vehicle for both sides to take time to listen and explain how their mutual interests in security, stability, prosperity, and human development can be enhanced in concrete terms through greater cooperation and collaboration. Morocco has demonstrated that it values America’s friendship, and that it will continue to move forward despite the difficult regional environment. And the US in turn recognizes the progress and contributions that Morocco continues to make internally, in the region, and beyond. It is a partnership grounded in values and interests that the two long-term friends are meeting next week to broaden and sustain.