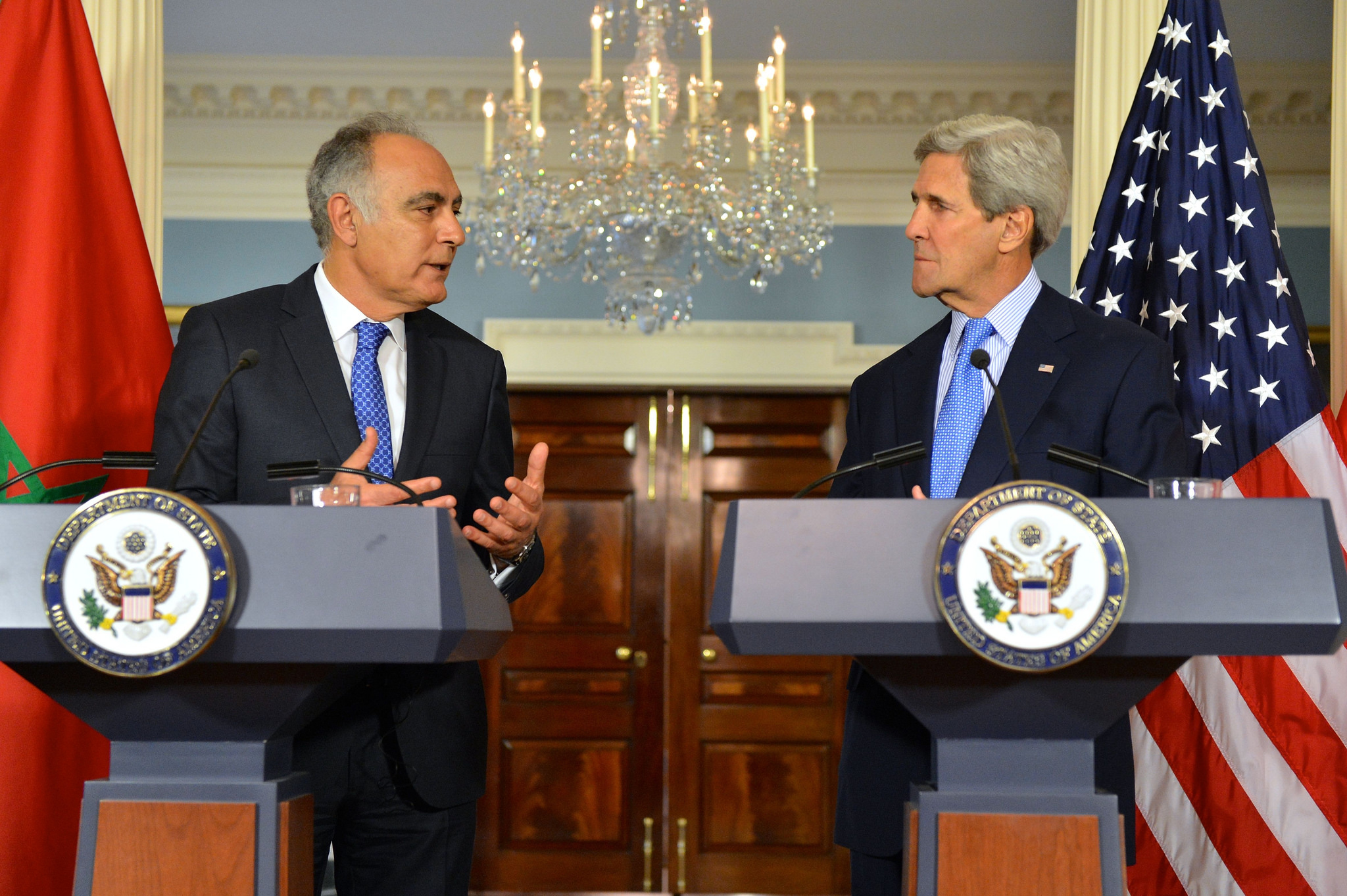 On Thursday, April 9, the US and Morocco issued a joint communiqué at the conclusion of the third Strategic Dialogue between the two countries. The US praised Morocco’s progress on many fronts, Morocco lauded the commitment of the US to stand by its ally and support its economic, social, and democratic reforms. The language of a special partnership resonated throughout the statement.

Building on the priorities established during King Mohammed VI’s visit to President Obama in November 2013 and subsequent senior-level visits, the statement noted that “our strategic partnership and shared vision will promote a secure, stable, democratic, and prosperous Maghreb, Sahel region, Africa, and Middle East.”

Secretary Kerry “reiterated the United States’ appreciation for the action and leadership of His Majesty the King …,” including his “continuing efforts to strengthen further Morocco’s democratic institutions and promote economic prosperity and human development.”

In anticipation of Moroccan local elections coming in September, the Secretary specifically noted “programs designed to strengthen political parties and civil society” as they prepare for the first ever elections under regionalization – Morocco’s program to devolve more power to locally-elected officials. These elections and the training programs are part of a continuing campaign to build local capacity to administer municipalities, determine local priorities and planning, and implement local solutions to address human development needs.

After lauding Morocco’s progress in reforming the military justice system, enabling more organizations to officially participate in civil society, advancing the powers of the National Human Rights Council (CNDH), and implementing immigration reforms enacted since last year’s Dialogue, the Secretary noted that both countries will work together to advance human rights at the UN Human Rights Council.

On the business front, the major item discussed in the communiqué was the anticipated second Millennium Challenge Corporation (MCC) compact, which focuses on education for a skilled workforce, and improving land policies and productivity. The communiqué also noted that both countries had signed an MOU wherein Morocco will share with select countries in Africa its expertise and lessons learned in the MCC relationship.

Secretary Kerry highlighted the leadership of King Mohammed VI in broadening and deepening Morocco’s relations with Africa. This has become a priority in recent years as instability and violence threaten more countries on the continent. The US and Morocco agreed “to work jointly … through a comprehensive and coordinated approach including food security, access to energy, trade promotion, conflict prevention, and the preservation of cultural and religious identity.”  With more than 100 agreements already signed between Morocco and African countries, and the King poised for another five-country visit later this month, Morocco is working hard to strengthen its leadership role in south-south cooperation, a role strongly supported by the US.

Reiterating America’s long-standing policy of support for autonomy for the Western Sahara under Moroccan sovereignty, the communiqué stated, “The United States has made clear that Morocco’s autonomy plan is serious, realistic, and credible, and that it represents a potential approach that could satisfy the aspirations of the people of the Western Sahara to run their own affairs in peace and dignity.” Both countries reaffirmed their shared commitment to improving the lives of the people in the Western Sahara and will consider a number of options to move ahead on that objective.

As expected, security cooperation was a key agenda item. In addition to addressing the various means through which Morocco and the US are working to counter violent extremism, Secretary Kerry thanked Morocco for its participation in efforts such as the Global Counterterrorism Forum and the Initiative on Open Border Security, as well as Morocco’s innovative training center for Imams, Morchidines, and Morchidates – prayer leaders and male and female religious counselors from Morocco, and other countries in Africa, the Middle East, and Europe.

The dialogue included discussions on “Morocco’s reform of its justice sector and promoting the rule of law, and … the launch of new law enforcement and counterterrorism programs, including a trilateral initiative with Moroccan and American trainers working together to train other African partners in border security and crisis management.” The communiqué further highlighted Morocco’s role in promoting dialogue among factions in Libya, working towards a comprehensive solution in Mali that deals with root causes, and a two-state solution to the Israel-Palestine conflict. In short, the friends were able in a few hours to reiterate their long-standing security commitments based on broadly shared goals and objectives.

“The Minister and the Secretary concluded by noting that the Moroccan–American strategic partnership is based both on shared interests and shared values which provide many avenues for cooperation and collaboration bilaterally, regionally, and globally.” It is a partnership that offers many opportunities to advance the quality of life for the people of Morocco, provides means for enhancing regional security and prosperity, and enables the United States to work effectively in a part of the world where it has an effective and motivated partner.