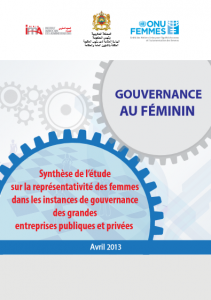 Article 19 of Morocco’s recently adopted 2011 Constitution stipulates that “men and women equally enjoy of civil, political, economic, social, cultural and environmental rights and freedoms.” Yet, gender inequality in the business world remains high: a 2013 study by the Moroccan Institute of Administrators, UN Women, and the Ministry of General Affairs and Governance found that women are underrepresented in company board of directors. Looking at the top 500 private and top 100 public companies, the study found that on average, only 7% of board members are women—11% in the more successful companies. Furthermore, more than 60% of companies had no women on their boards at all.

To address this issue, civil society organizations throughout the country have launched initiatives to encourage gender parity in different fields, from politics to law to business. One such organization is the Club of Women Corporate Directors (CFA). Founded by Nezha Hayatt, President of Sogelease Morocco (a subsidiary of Societe Generale) and the first Moroccan woman ever to become a member of a bank’s board of directors, CFA works to incentivize public and private companies to include women on their boards of directors. The CFA organized on April 13, 2015 in Casablanca, a conference on potential mechanisms Morocco can employ to implement gender parity in companies . Marie-Jo Zimmermann, French MP and Vice Chairwoman of the Delegation of Women’s Rights at the French National Assembly; Nizar Baraka, President of the CESE; and Viviane Beaufort, Co-Director of the European Centre for Law and Economics and Academic Director of the program “Women Entrepreneurship” at the ESSEC Business School in France, were invited to speak on the issue.

The panelists contended that multiple studies have revealed that companies that are more gender-inclusive, especially in managerial positions, are more productive; and there seems to be a strong correlation between high rates of female board members in companies and better governance and ethics quality at the company. MP Zimmermann talked about France’s experience in institutionalizing a quota that would ensure that no less than 40% of board members of large and medium-sized companies be women.

Through her discussion of the French experience, MP Zimmermann offered a potential solution to Morocco’s under-representative company boards. Countries like France and Norway have chosen to adopt laws to fight gender inequality in the economic sector and have seen the number of women in managerial positions soar. Another potential solution is that used in the US and the UK where, instead of enforcing quotas, they opted to encourage companies through, for example, Code of Corporate Governance development programs.

As Morocco moves forward with implementing its gender parity laws, it will have to choose the mechanisms it wants to adopt in order to reach its goal of fighting gender inequality. However, Ms. Hayatt warned that, as important as choosing between the quota or incentive system is to implementing gender equality, one must not forget the important role society and culture play in maintaining the status quo. For either system to work, Morocco will have to encourage cultural and societal perceptions of women in managerial perceptions to evolve and become more accepting of that phenomenon. “What usually prevent women from reaching managerial positions are societal and cultural dogmas,” said Hayatt.

Ms. Layadi is a research assistant at MAC.