Former U.S. Ambassador to the United Nations and Governor of New Mexico, Bill Richardson, supports Morocco’s autonomy plan as the only viable way to find a fair minded political solution: 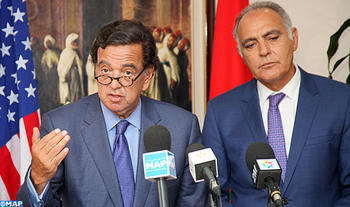 Morocco’s autonomy initiative represents the only viable way to reach a political settlement to the Sahara issue, Former Governor of New Mexico Bill Richardson said on Wednesday in Rabat.

The autonomy proposal is  “the only viable way to find a fair minded political solution” to the Sahara issue, the former US official told the press following talks with Foreign Minister Salaheddine Mezouar.

Morocco’s initiative was described as “serious, credible and realistic” by the administration of three American presidents, he added.

“A political solution necessarily means a compromise solution (…) it means a win-win solution,” said Richardson, a renowned diplomat who took part in negotiations to set free the US hostages held in conflicts in North Korea, Cuba, Iraq and Sudan.

Richardson hailed Morocco for clearly embracing this approach to solving the problem through offering the local Sahara population “the right to largely govern their own local affairs as an autonomous region of the nation.”

While commending Morocco’s “courageous willingness” to find a compromise solution to this issue, Richardson called on the other parties to embrace the same spirit of fair-minded political compromise and ” move forward to end this conflict that has already caused too much personal harm to the families of the region and the stability of the Maghreb.”

Besides the Sahara issue, other developments relating to Moroccan-US relations and the challenges facing the region were also raised during Richardson’s meeting with Mezouar…[Original Story, Subscription Required]