African Lion, the largest annual US joint military exercise in Africa, kicks off phase two of its 2015 operation this week in Agadir, Morocco: 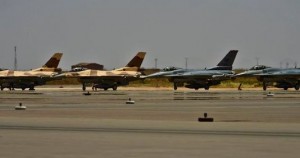 “There are a bunch of units here from every service, from Marine combat logistics regiments and law enforcement battalions to an Army law enforcement unit and a public affairs detachment,” Vayavananda told Military Times. “The logistics Marines also support the maritime offload in coordination with U.S. Military Sealift Command and U.S. Transportation Command to get the gear here from ship to shore.”

“The Moroccans have brand new F-16s they purchased in 2011, and they are already flying combat operations with them, which is extraordinary,” Oury told Military Times.

“They have one of the most capable air forces on the African continent, and we are very interested in working with their capabilities, and accomplishing objectives such as sharing our experiences and building stronger relationships.”..[Full Story]