A joint statement on Morocco-Guinea Bissau cooperation in the wake of King Mohammed VI’s latest diplomatic tour of West and Central Africa: 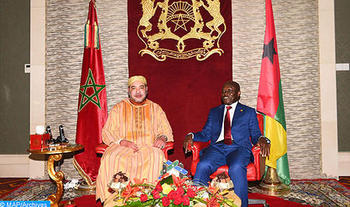 In a joint statement issued at the end of the visit of the King to Guinea-Bissau on May 28-30, President Mario Vaz voiced support for the Sovereign’s call for a genuine and multi-dimensional south-south cooperation between African peoples.

Guinea-Bissau’s President also expressed his country’s unconditional support for Morocco’s sovereignty over its southern provinces, the Sahara and for Morocco’s territorial integrity.

On the conflicts in Africa, the Joint Statement stresses that safeguarding stability hinges on economic growth and the fight against poverty and exclusion through setting up sector-based political and economic reform.

The two heads of state also pointed out in the joint statement to the need for facing security threats and organized crime networks. They also called on the international community to bring steadfast support to efforts aiming at promoting the rule of law.