Why Supporting both Small and Large Farms Makes Sense 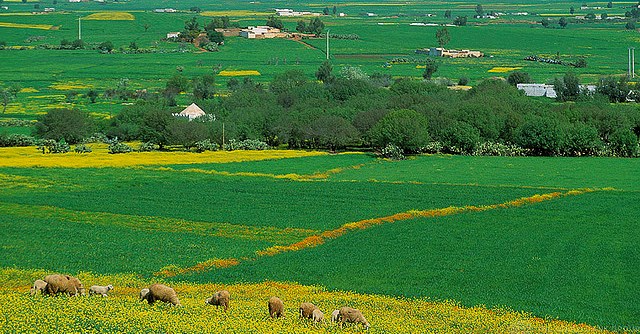 At MAC, we recently had the opportunity to speak with about 30 American high school students on their way to study in Morocco for six weeks. One of the topics that generated a lot of discussion is how the economy is going to generate the number of jobs needed for the large number of young people entering the market every year. One of the answers they didn’t expect was to invest more in the agricultural sector.

Although much has been written about the unemployment rate among university graduates and the high numbers of Moroccans who do not finish secondary school, the statistics are even more dire when one looks at rural areas. Until farm families are able to increase productivity and become more profitable, educating children beyond the mandatory primary school level is a luxury. The challenge is great: more than 95 percent of youth now have access to primary school education, but “less than 15 percent of first grade students are likely to graduate from high school,” according to USAID.

Much of the educational gap can be attributed to the difficult economic conditions in rural and overcrowded urban areas – communities that do not have a sufficiently strong local economy to sustain jobs for parents and young people that allow for savings and re-investment in household goods, services, and education. Another issue in rural areas is the cultural constraint that favors males over females in terms of access to education and advancement.

King Mohammed VI outlined these challenges in a keynote speech in August 2013, when he “emphasized the role of education as a leverage for social and economic inclusion and outlined the goals still to be done and the resources to be mobilized to achieve them,” according to the World Bank. He called on the government, private sector, NGO community, and international donors to support Morocco’s drive for educational reform, which is a key ingredient for economic progress.

But educational reform will not play a major role in rural areas until the agricultural sector is more efficient and profitable. That sector’s success is a national priority because it is a major force in the economy. Depending on the annual rainfall, farming can make up more than 15 percent of GDP while employing upwards of 40 percent of the labor force. In order to improve the agricultural sector’s performance, the government launched Plan Maroc Vert (PMV), or Green Morocco Plan, in 2008, to support both small and large farms in becoming more efficient and market oriented. The PMV’s goal is to increase agricultural production and diversity, and reduce rural poverty and rural-urban inequality. Reducing poverty will enable more rural youth to pursue education beyond the primary level.

Earlier this year, Hafez Ghanem, senior fellow in the Global Economy and Development Program at the Brookings Institution, authored a working paper “Agriculture and Rural Development for Inclusive Growth and Food Security in Morocco.” In it, he argues that supporting small family farmers “needs to be complemented by the introduction of new social safety net programs based on cash transfers, and by building new inclusive economic institutions that represent small farmers and ensure that they have a voice in the policymaking process.”

This is no small task under any conditions so why should supporting small farmers become a national priority? First of all, the sheer numbers, as there are more rural workers than urban. If farms cannot sustain families, more unskilled workers will go into urban areas that do not have the services to support them. “Rural poverty in Morocco is about three times higher than urban poverty, and the majority of rural poor depend directly or indirectly on agriculture for their livelihood,” the paper noted.

In addition, food security for all Moroccans is directly related to the health of the agricultural sector. Morocco imports three times the world average of imported cereals and “spends about 20 percent of its export revenues on food imports, which is about four times higher than the world average.” With a stronger and more diversified and efficient agricultural sector, Morocco would be less dependent on high-cost imports and have greater control over food security for its growing population.

Family farming is a core concern of the PMV, since “The vast majority of agriculture in Morocco is under family farming,” nearly 70 percent of the farms are less than 5 hectares, and large modern farm earns about nine times more than the average family farm. What is important about PMV is that it “tries to balance the desire to develop modern agriculture with the need to support family farmers,” an essential outcome to promote rural employment, add value to the agricultural job market, and provide incomes that sustain families on the farms.

The focus on small farms relies on government financing, although farmer stakeholders contribute as well. The overall program consists of 545 projects costing about $2.5 billion over ten years, targeting 950,000 farmers in remote and difficult areas. Enhancing existing production; introducing higher value alternatives; and diversifying activities that contribute to farm incomes are the main components of the plan. In order to strengthen co-ops and other entities serving farmers, there are special provisions covering the role of associations/aggregators that participate in the program.

Plan Maroc Vert demonstrates the commitment of Morocco to its agricultural sector as an income generator, employer, force for stability, and national engine for growth. Lessons learned from other countries are providing examples of how to give farmers tools to access domestic and international markets, encourage greater access to financing schemes that promote productivity, and enhance the roles of producer organizations and cooperatives in affecting decisions that impact their sector. This commitment in large part influenced the decision of the Millennium Challenge Corporation to focus its first compact with Morocco on agricultural development – enhancing the capacity of small farmers to generate value-added production to help raise them out of poverty.

PMV is a worthy program that has the potential to change the face of agriculture in Morocco. As importantly, its success will enable thousands of young Moroccans who live and work on family farms to have the resources and access to education and training that will give them opportunities that seemed remote and inaccessible just a generation ago.