When it comes to economic development, demographics can be both a challenge and an opportunity. In North Africa in particular, the youth bulge presents an enormous opportunity for fundamental shifts in society and the economy, yet it is also a looming threat for those tasked with creating enough jobs for them.

So far, the region is falling behind on creating sufficient job opportunities that encourage stability over the longer term, let alone generate development and growth. In the case of Morocco, a known bastion of stability in the region that has successfully employed long-term strategies to promote a targeted array of growth sectors, youth unemployment remains stubbornly high. And, as a new report from Brookings points out, another demographic challenge exists within that context: low Female Labor Force Participation (FLFP) rates. As a whole, women in the Middle East and North Africa region (MENA) constitute just over a quarter of the working population despite being about half of the total population.

Morocco’s strategies for economic development have generated both headlines and results. The country has essentially created automotive and aeronautics sectors from scratch, bringing in major production facilities from companies such as Renault and Bombardier. Critics argue that a few new factories won’t solve the unemployment issue, but Morocco’s approach is also successfully promoting related downstream and supply chain activities in order to create the kind of production hubs that have a multiplier effect on those initial investments. Preliminary results are good, but it is a long-term approach.

Beyond manufacturing, Morocco is also having success developing job-intensive services industries, such as financial services (see Casablanca Finance City), offshoring (call centers and back-office services), and tourism. In agriculture, which is responsible for a huge chunk of both GDP and jobs in the country, Morocco has had success in pushing towards more efficient crops and production methods. Entrepreneurship has also been promoted through a bevy of reforms and programs, with the hope that both innovation and job creation can be sparked largely through the private sector. The strategy and its results have been impressive, but youth unemployment in general and low FLFP in particular persist.

The lack of women in the workplace represents a massive opportunity cost for the Moroccan economy, particularly given the advancements Moroccan women have made in other areas—such as school enrollment, which has increased significantly. In spite of these gains in education, Morocco’s FLFP has actually declined in recent years—which may be part of larger economic patterns.

The Brookings report cited an IMF study that showed “a U-shaped relationship between GDP per capita and FLFP.” Basically, as poor countries get richer, the rate of working women actually declines steadily and then begins to rise again, forming a ‘U’ shape. This is likely because in the poorest countries there is more of a necessity for women to work, especially in agriculture-dominated economies. Middle-tier income countries, however, seem to be able to support a lower FLFP. The Brookings report also notes that as a region, MENA has one of the lowest FLFP rates. Morocco appears to be a part of both of these trends, but it is working to break out of them. 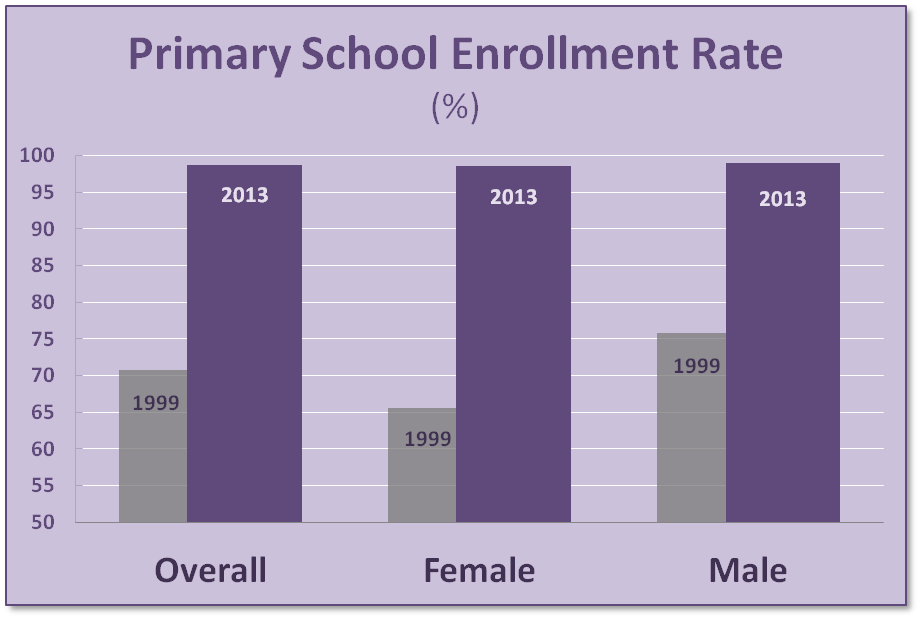 To start, Morocco has made necessary changes to promote women in the workplace, notes the Brookings report. Reforms to the “Moudawana” family code in 2004 fundamentally changed the legal rights of women in the country, and anti-discrimination laws protect against gender-based labor discrimination. The report cites a social institution and gender index that ranks Morocco as the second-best in the entire MENA region.  Additionally, “great progress” has been made in boosting female enrollment in schools along with huge gains in overall enrollment from the past 15 years. Now, the biggest disparity in school enrollment is between urban and Rural populations, rather than men and women.

FLFP has been shown to increase in Morocco with every additional level of education. Still, survey results show that young women in Morocco are being held back by social limitations, even in urban areas. A 2010 World Bank survey showed that over 45 percent of young women say that the reason they don’t work is because a family member decided against it, while only about 4 percent said that they couldn’t find a job or were lacking skills.

Attempting to change social norms is a tall order. One good approach to this problem is to promote good examples—and Morocco seems to understand how. Morocco hosted the 5th Global Entrepreneurship Summit late last year, part of an effort to help sustain a growing “cool” factor behind entrepreneurs in the country. Seated prominently next to U.S. Vice President Joe Biden at one of the panel discussions: Yasmine El Baggari, a young woman entrepreneur. Morocco is also trying to find new ways to put women in board rooms. Morocco’s Confédération Générale des Entreprises du Maroc (CGEM), the main employers’ association in the country, is headed by one Miriem Bensalah-Chaqroun.

This approach has even extended beyond the economic sphere, as women are playing a key role in the fight against extremism through its Mourchidate program. In government, a quota in Parliament has resulted in women making up 17% of the Members. Not an overwhelming figure, but it’s a start. While some may see these actions as symbolic, their impact on perceptions of women in society could pay huge dividends in time.