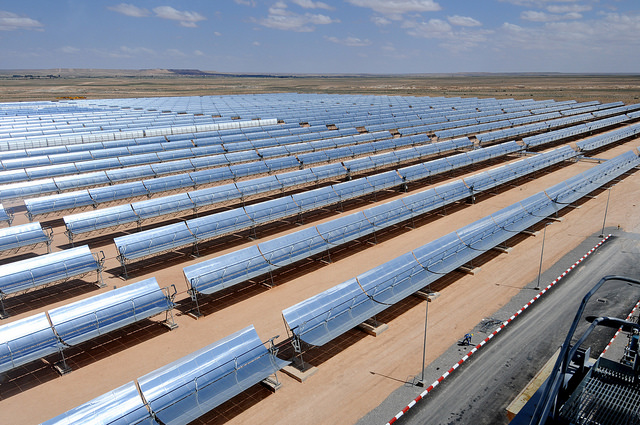 Starting in November of this year, the 21st Session of the Conference of the Parties to the UN Framework Convention on Climate Change (UNFCCC), referred to in the shorthand as “Paris 2015,” will culminate the latest effort to formalize a grand environmental bargain on a global scale. The Paris conference “seeks to crown a six-year wrangle in the 195-nation UNFCCC with a post-2020 pact on curbing greenhouse gases.”

This summer, Morocco took the initiative and laid out a plan to “reduce its emissions of greenhouse gases by 2030 by at least 13 percent.” With help from the international community, Morocco says it can bring that reduction figure all the way up to 32 percent. Morocco was the first Middle East & North Africa country to have made this pledge, known as Intended Nationally Determined Contributions (INDCs), in advance of Paris 2015.

Morocco’s pledge was also noteworthy in its reliance on reducing fuel subsidies as one of the main pillars towards reducing carbon emissions. Those fuel subsidies are costly and limit incentives to conserve or find alternatives, but their removal is not surprisingly a politically sensitive issue. Morocco is also one of only 11 submitted INDCs to include measures for coping with adaptation to climate change, rather than simply mitigation. 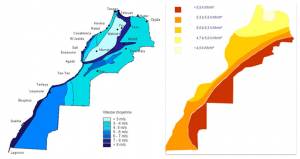 Although the pledge marks a bold new step, Morocco-watchers weren’t entirely surprised by the pledge. The reason: for years, Morocco has been busy following up on an ambitious goal to have 42 percent of the country’s energy come from renewable sources by 2020. From the start, this drew attention worldwide. In a recent interview with Clean Energy Pipeline, US-based developer Alpha Energy admitted that this pledge is what “inspired” them to enter the Moroccan market, adding that “Morocco has since passed several laws that have boosted private sector participation in the country.” Alpha Energy is in the final stages of financing the Tan Tan wind project, which aims to produce 98 MW and could end up producing 498 MW with potential expansion.

Morocco’s commitment is based in necessity. Unlike some of its neighbors, Morocco doesn’t have huge fossil fuel reserves, and as a result it has imported as much as 95 percent of its energy as recently as 2011. On the other hand, Morocco does have expansive Atlantic and Mediterranean coastline that is ideal for harvesting wind. And of course, the Sahara desert is an ideal place to lay down some solar panels (or more specifically, CSP). For Morocco, renewables are simply a way to capitalize on its comparative advantages.

Investors and developers have bought in. Companies from the US, Europe, and Gulf have streamed in to pitch projects, securing a wide range of funding from the major Development Institutions and even local Moroccan banks. Morocco will soon be home to Africa’s largest wind farm and Africa’s largest solar park. Morocco has emerged as an obvious contender in the race to become Africa’s first “green superpower.”

Since the National Energy Strategy was unveiled in 2009, Morocco has consistently advanced its agenda and produced real results. When the International Energy Agency checked in with a report entitled, Morocco 2014 – Energy Policies Beyond IEA Countries, it praised Morocco’s follow-through, concluding that the plan “is being implemented in accordance with the deadlines set at its launch.” Production of domestic renewable energy grew incrementally until 2013, when it began a spike that will likely sustain as major projects come online and others expand. 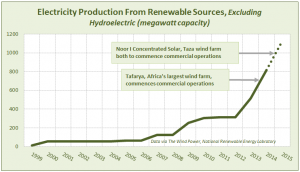 In this context, Morocco’s INDC pledge does not come as a surprise. What was born in necessity has put Morocco into a leadership role in global climate issues, and it isn’t shying away. Moroccan Environment Minister Hakima el-Haite played a role in the creation of the “Istanbul declaration,” which called for “a spiritual fight against climate change that will be very important for Muslims.” She added that, “It speaks to issues of fairness, accountability, differentiation and adaptation in the Paris agreement. I think that the right way to make this sort of call is through the Qur’an.” The declaration followed a similar effort by the Pope to encourage more commitments towards the Paris 2015 summit.

As more and more people speculate that climate change will fuel conflict in Africa, it is easy to see why Africa’s leaders are actively pushing for better climate policy on both the domestic and global levels. Given Morocco’s track record so far, it is safe to expect that Morocco will aggressively advance the agenda at Paris 2015 and commit to following through on its pledge. There’s an obvious opportunity to check in on the progress – Morocco is hosting the 22nd Session of the Conference of the Parties to the UNFCCC next year. I suppose we can start calling that one “Marrakesh 2016.”