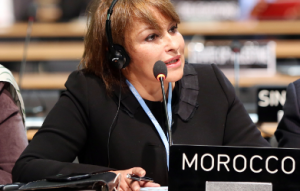 World leaders have been meeting in Rabat, Morocco this week to discuss climate pledges ahead of the 2015 United Nations Climate Change Conference to be held in Paris this December. As The Guardian reports:

Some 150 countries representing around 90% of the world’s carbon emissions have now filed pledges to curb them, dramatically increasing the chances of a deal at the Paris climate summit in December.

The French development minister, Annick Girardin, said that many of the pledges came from developing countries, and had brightened prospects for a climate treaty in December.

“We’ve now got a global positive dynamic telling us that the world is moving on climate change,” said Girardin. “It was unexpected to receive all these contributions and it sends a very strong signal from Rabat that we can reach a global agreement in Paris”…

… after fears at the highest level this summer that slow progress could doom an agreement in Paris, a sense of relief, if not optimism, was tangible in Rabat.

“We are making history,” the Moroccan environment minister, Hakima el-Haité told the UN meeting. “The fight against climate change is not going to end in Paris. It is not going to end with our generation. It is a long term struggle and our efforts so far are not sufficient. But in terms of progress, we have made a revolution in just one year.” [FULL STORY]