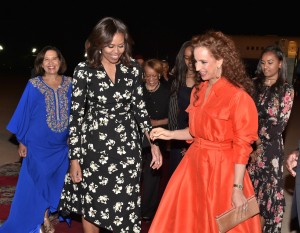 Washington, DC, June 28, 2016 (MACP) — First Lady Michelle Obama is in Morocco today and Wednesday to promote her Let Girls Learn initiative. Launched in March 2015, the initiative brings together the Department of State, the US Agency for International Development (USAID), the Peace Corps, the Millennium Challenge Corporation (MCC), and other agencies and programs to help adolescent girls worldwide attain a quality education.

“It just makes sense for boys and girls to be educated and involved and empowered,” said the First Lady during a panel discussion held in Marrakesh, where she was joined by actresses and fellow women’s education activists Meryl Streep and Freida Pinto.

The visit—the first in North Africa for the Let Girls Learn initiative—brings new energy to several existing US-Morocco programs focused on girls’ education. Signed in November 2015, the second US-Morocco MCC compact includes the Education and Training Project, which prioritizes “delivering quality secondary education focused on the employability skills needed for the modern workforce,” and which will make a concerted effort “to ensure that the project results in equitable outcomes for both girls and boys and reduces social, gender, and regional inequalities.” Today, and in conjunction with the First Lady’s travels, the White House provided additional details on MCC’s $100 million investment in what it referred to as “a new model for secondary education in Morocco,” citing activities like “mentoring programs, internships, after-school clubs, upgrading bathrooms and changing rooms for girls,” and more.

In its 2013-2017 Country Development Cooperation Strategy for Morocco, USAID pledged to work with Morocco’s Ministry of Education “to develop gender-sensitive reading materials” and “ensure gender equity in the delivery of training programs.” Today, USAID announced a “new $400,000 investment to establish five new girls’ dormitories… which will be ready by the next school year” and will allow girls living in rural areas to attend school.

The White House also announced that in the coming months, Morocco will become the Peace Corps’ 36th Let Girls Learn country, wherein “the Peace Corps will train incoming volunteers and community leaders to advance girls’ education and empowerment, and will work with local leaders to focus on girls’ development through a renewed focus on building critical skills for leadership and employment.”

“I am so proud that the US is working with the Moroccan Government to make these transformative new investments to educate and empower girls across Morocco – investments that will help these girls succeed in the workforce and fulfill their boundless promise,” said Mrs. Obama in a statement.

These programs build on decades of work that the Moroccan government and civil society groups have done on their own to improve the status and strengthen the rights of women in the country. In February 2004, Morocco officially adopted a new family code, one of the most progressive laws on women’s and family rights in the Arab world, that raised the age of marriage for girls from 15 to 18, provided women new rights in divorce, and gave wives joint responsibility for the family with their husbands. Article 31 of Morocco’s Constitution, adopted by referendum in 2011, requires the government to “facilitate the equal access of [female and male] citizens to conditions that permit their enjoyment of the right… to a modern, accessible education of quality.”

“The King has made women’s rights and education top priorities since day one, and significant progress has been made,” said former US Ambassador to Morocco Edward M. Gabriel. “With the US joining Morocco’s leadership in this regard – two longtime allies working together – progress on women’s education will accelerate all the more.”

The First Lady is accompanied in Morocco by her mother, Marian Robinson, as well as her daughters, Sasha and Malia Obama. Prior to Marrakesh, Mrs. Obama was in Liberia; she will next be traveling to Spain, the third and final destination of her Let Girls Learn tour.