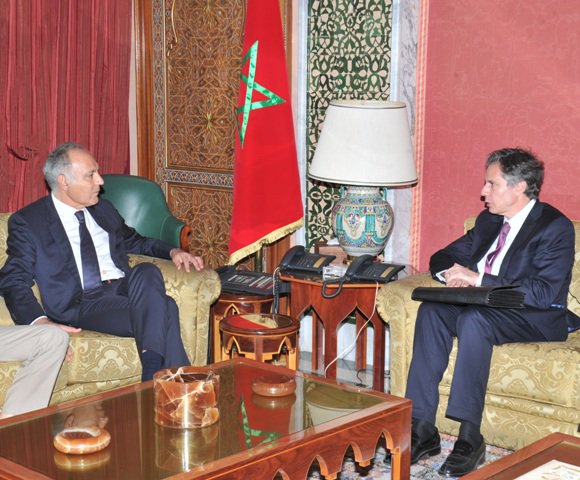 Washington, DC, July 21, 2016 (MACP) — US Deputy Secretary of State Antony Blinken was in Morocco Wednesday and Thursday to meet with government officials as well as university students, entrepreneurs, and NGOs to discuss the fight against violent extremism and the 22nd Conference of the Parties to the UN Framework Convention on Climate Change (COP 22), which is scheduled to take place in Marrakesh in November.

“The US-Moroccan partnership is key, not only to address common challenges, including security and climate, but also to benefit from available opportunities,” said Mr. Blinken at a joint press briefing on Wednesday with Morocco’s Minister of Foreign Affairs and Cooperation Salaheddine Mezouar.

“We greatly appreciate the leadership of the Kingdom, host country of the 22nd Conference of Parties to the UN Framework Convention on Climate Change, on a large number of issues related to environment and climate,” he noted.

Minister Mezouar stressed that “the US commitment to the climate issue is crucial to accelerating the implementation of the Paris Agreement, the fight against climate change, capacity building, mobilization of funding and technology transfer.”

On security, the two officials reviewed “several issues of common interest, particularly the threat of Daesh, the issue of terrorism, religious leadership and the importance of promoting the value of tolerance advocated by Islam,” according to Moroccan press reports. Minister Mezouar “noted a convergence of views in relation to the Middle East and Libya,” and that the fight against Daesh in Libya, Iraq and Syria “is beginning to bear fruit.” Mr. Blinken praised the role played by Morocco in the fight against extremism and terrorism, which includes participating in the US’s anti-ISIS coalition, co-chairing with the Netherlands the Global Counterterrorism Forum, and an oft-lauded strategy of promoting religious tolerance and moderation throughout the region.

In addition to his meetings with government officials, Mr. Blinken also met with international relations and political science students from the International University of Rabat as well as with green entrepreneurs and innovators. Tweeting on these encounters, Mr. Blinken said he was “inspired by [meetings] today highlighting Morocco’s bright future” and “bowled over by eco-entrepreneurs,” whose “Innovative ideas/solutions [are especially] critical ahead of #OurOcean & @COP22 this fall.”

Mr. Blinken will next travel to Tunisia and Algeria.