Although the summer holidays are over, business in Morocco continues to heat up as the economy heads into the last quarter of the year drawing additional foreign direct investment to build its manufacturing base and decrease its dependence on rain-fed agriculture. Despite the upcoming elections in October, the government is still advancing proposals to make the economy more efficient and accelerate growth in key sectors. But the biggest news for many people is the expansion of Royal Air Maroc flights to another US gateway city – Washington, DC.

US-Morocco Airlink Inaugurated: Travelers to Morocco and Africa are quite pleased with the launch of Royal Air Maroc’s thrice weekly non-stops between Casablanca and Dulles International Airport in the Washington, DC metropolitan area. A long-awaited intercontinental connection, the flights greatly reduce the travel time between the two cities to less than seven hours and open the doors to the more than three dozen African cities served by Royal Air Maroc from Casablanca.

Eye of the Beholder: There are mixed forecasts about the performance of the Moroccan economy. Fitch, the ratings agency, took a look at Moroccan banks and noted that their profitability is under pressure due to slow growth, except in Africa, and charges against bad loans. The Fitch Rating report also cites the weakness of the SME sector geared to exports to a yet-to-rebound European economy, similar challenges to major Moroccan firms, and the “overall low demand for loans in the absence of economic growth.” This anemic growth is project to continue in 2016 with dynamic lending growth returning sometime in 2017.

This somewhat subdued prognosis contrasts with the overall picture presented by the Moroccan government for the national economy in 2017. According to a story published by Reuters, the projection is for GDP to grow by around 4.5% in 2017, a marked improvement from less than 2% in 2016. The key variable here is the agricultural sector, where poor cereal harvests in 2016 slashed output in the sector from 11 million tons in 2015 to 3.35 million tons in 2016. The latest projection assumes 2017 cereal projection at 7 million tons. Another positive note is that the budget deficit will decline to 3% of GDP, down from 3.5% in 2016 as the country continues to manage its finances more effectively.

The report concludes that “Morocco has done more than most North African countries to make painful changes required by international lenders to curb deficits, such as ending fuel subsidies and freezing public-sector hiring. The government still controls the prices of soft wheat and cooking gas.”

Big and Not-So-Big Players Support Growth: Eaton, a major American energy and technology company, which has been supplying equipment to Morocco for some 40 years, has now become an investor in the manufacturing sector. It announced a project valued at more than $12 million in Casablanca to produce equipment to service its clients in the kingdom, Europe, and Africa. In addition to Morocco’s prime geographic location near to its customers, Eaton cited the quality of the country’s workforce and stability as key factors in the decision. It is expected that 550 Moroccan jobs will be created by the investment, with at least 20% of production locally sourced.

While this is good news for the Moroccans directly and indirectly affected by Eaton’s investment, the entrepreneurial sector is still constrained in Morocco by an inadequate policy environment, lack of access to financing, and the need to build entrepreneurial skill sets. According to the international development experts at Devex, Moroccans are pushing hard to expand access to investment capital and upgrade capabilities of nascent entrepreneurs. A key initiative is to link entrepreneurs with smart ideas with local professionals who can provide the management and business expertise to attract start-up capital or angel investors, depending on the project’s stage of development. Those who are pushing for a more entrepreneurial-friendly environment are mobilizing to promote their agenda with the new government after the October elections. 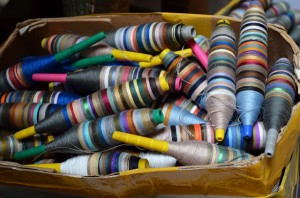 Morocco Petitions to Retake Quotas on Textile Exports to US

According to information released by the US International Trade Commission (USITC), Morocco has petitioned the US for exemptions in certain categories of textiles manufactured in Morocco that are no longer covered under the Morocco-US Free Trade Agreement (FTA). Under the original legislation, which celebrated its many successes earlier this year, Morocco had an expanded general quota of textiles exports to the US across all potential categories such as sportswear, ladies, children, knit fabric, etc. This special quota ended 31 December 2015.

Under the “rules of origin” condition of the FTA, Morocco has to source at least 35% of the textile product in order for it to be exempt from duties, which means that 35% of the value of the product has to originate in Morocco. Since the kingdom primarily provides labor rather than the components parts (fabric, buttons, zippers, etc.), it has not met the 35% rule and so is restricted in what it can export to the US.

Under the current scenario, called “short supply,” Morocco has asked the US to exempt exports to the US in categories in which current domestic US suppliers cannot meet the demands of the US market. This requires two steps: identifying the specific categories of textiles and then petitioning for an exemption. It is a laborious process but one that is key to re-building Morocco’s textile business with the US.

Overall, Morocco only supplies .12% of US textile imports so it’s hard to imagine how re-establishing the previous quotas would hurt America’s domestic industry. More than 22,000 textile jobs are directly affected by business with the US, so it’s a big deal to Morocco.

Next week, we’ll have another Business in Brief blog with some key business news from Morocco.