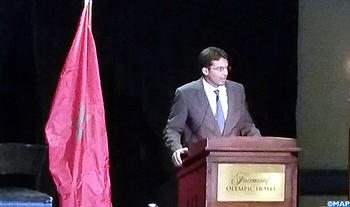 The third US-Morocco Trade & Investment Forum took place on Monday in Seattle, right on the heels of some big news: just a few days earlier, Morocco and Seattle-based Boeing announced plans to establish an aerospace ecosystem in the North African kingdom that will bring 120 Boeing suppliers to the country, create 8,200 skilled jobs, and generate $1 billion in exports.

The Forum served as the perfect opportunity for Boeing to preach the benefits of manufacturing in Morocco to its many suppliers, a case that Morocco’s Minister Delegate to the Minister of Industry, Trade, Investment and Digital Economy Mamoune Bouhdoud pushed in his keynote address, as well. “I believe that such an iconic deal tells much more than a thousand speeches about my country’s industry and investments assets. There is, after all, no better advocate for Morocco than this kind of deal,” he said.

The Forum convened some 100 business leaders and government representatives from both countries for presentations on the subject.

In a call on aerospace opportunities in Morocco organized by the State Department’s Bureau of Economic and Business Affairs before the Forum, Ambassador Bush said, “With a strategic geographic location and historic ties at the crossroads of Europe, Africa, and the Middle East, and its pursuit of integrated supply-chains and entrepreneurial opportunities, Morocco has developed into an important regional player in supplying the aircraft industry for Europe, the Americas, and around the world.”

In recent years, Morocco has successfully positioned itself as a gateway for US companies to African and European markets; and through aggressive economic reforms, it has become a top destination for foreign direct investment in Africa. The 2016 Bloomberg Innovation Index named Morocco among the 50 most innovative economies in the world, and one of just two such in Africa. The results echoed the findings of many industry reports of recent years. KPMG International and Oxford Economics’ 2015 Change Readiness Index ranked Morocco as the most “change-ready” country in the Maghreb, with particularly positive results in the category of “enterprise capability.” The World Bank’s Doing Business 2016 ranked Morocco first out of 20 MENA countries for “ease of starting a business” and placed it sixth overall in the region for “ease of doing business.”

The US-Morocco Trade and Investment Forum is an annual event: the forum was held in Atlanta in 2015, hosted by Coca-Cola; and in Dallas in 2014.