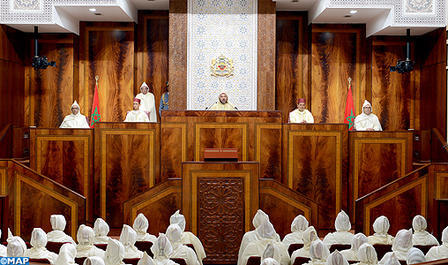 Calling government efficiency “a yardstick of a nation’s progress,” the King lamented that “when dealing with state agencies, citizens face a wide range of difficulties, be it in terms of reception, communication or the processing of files and documents – so much so that in the citizen’s mind, this has come to resemble an obstacle course.”

The King enumerated several areas where citizens have voiced frustration, including “expropriation issues, either because the State did not compensate them for their property, or because the compensation process took many years and was, therefore, detrimental to their interests”; “long and complex judicial procedures as well as the failure to enforce sentences, particularly against government institutions”; and “the complexity of procedures and long delays in delivering administrative documents”; among other examples.

He made special mention of the ways in which bureaucratic red tape leads to lost investment opportunities; and also called out “the widespread administrative issues… relating to the implementation of the Family Law, resulting in family and social problems.”

“More than twelve years after the introduction of this social reform, there are some who are still unaware of the content of this law, and who do not know their rights and obligations, particularly among the Moroccan community abroad,” he said. “I therefore urge the Government and all the administrative and judicial institutions concerned to see to it that this law is properly implemented, to raise public awareness about its content and to amend and update it as may be needed, in order to overcome the problems revealed by practical experience.”

More broadly, the King urged that “special attention should be given to staff training” and incentive programs since “staff members are the key link in the citizens’ relationship with government institutions”; that “e-government services should be offered across the board… to facilitate quick citizen access to services, without having to go to state agencies and interact with the staff, which is the main reason for the prevalence of corruption and abuse of power”; and insisted on “the need to develop and adopt an advanced administrative devolution charter that fits the requirements of the current situation.”

“Administrative reform requires a change of attitudes and mindset as well as quality laws in order to have effective state agencies that serve the citizens,” he said.

“King Mohammed VI understands that for democracy to flourish in Morocco, the people must feel that their voice is heard, and that their elected leaders are there to serve them,” said Jordan Paul, Executive Director of the Moroccan American Center for Policy. “Under the King’s leadership, Morocco has been molding and enhancing its democratic institutions for almost twenty years. Clearly he acknowledges that there is work still to be done, and we should applaud him for continuing to push for more reform and more accountability.”