In the first Millennium Challenge Corporation (MCC) compact with Morocco that ended in 2013, more than $19m was allocated to planting and improving fruit trees. The agricultural portion included three efforts related to fruit trees: improving the use of scarce water resources through better irrigation and watering techniques; increasing the number of new plantings of olive and almond tree; and improving the production and marketing of these crops. More than 145,000 acres were included in the MCC olive tree program and the Moroccan government funded plantings on an additional 47,000 acres. It is anticipated that the olive trees will begin to bear fruit during the upcoming year, with higher yields already being realized from plots that were targeted for improved watering and production.

The High Atlas Foundation makes significant efforts through several of its environmental and economic development programs to enhance the use of fruit and other trees to improve the lives and livelihood of rural communities. It has embarked on several ground-breaking projects to heal the land through improved irrigation and water-capture technologies and enable rural communities to implement economic development projects around innovative nursery and tree planting efforts.

A recent article in Reuters looked closely at another project that is enabling farmers to grow more olives, utilize less water-intensive crops, and learn to market their production more effectively to produce higher incomes for the communities.

Through more precise irrigation, pruning, and the use of electronic equipment, local farmers have been able to more than quadruple their yields from 20 to 100 kg or more. In addition, the quality has increased due to more immediate pressing of the olives. 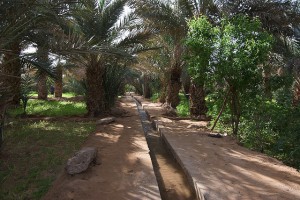 This is only one of the many projects that are part of Plan Vert Maroc (PVM), the national effort to improve the agricultural sector. There are two parts of the plan, one for large corporate-style farms, and a second for small landholders organized around community coops to more efficiently manage their production and marketing.

An additional benefit, targeted by both PVM and the MCC, is increased opportunities for young men and women to work in agriculture in rural communities rather than migrate to urban areas. The teams of young people working with the farmers are well-trained, have access to modern equipment and technology, and enjoy a higher quality of life than might otherwise be available.

Of course, the farmers are enthusiastic as well. According to the article, “Khalid Batrah, 42, is one of the farmers participating in the project to develop agricultural value chains, backed by the Moroccan government and the International Fund for Agricultural Development (IFAD), a U.N. agency that supports rural people. Thanks to a drip irrigation system, which delivers water directly to the plants’ roots, Batrah has branched out into melon, pea and bean production on his 10-hectare (24.7-acre) olive farm, roughly tripling his revenues.”

Using drip irrigation has enabled Batran to see immediate results in yields and “He now employs three permanent workers and as many as 100 people during the olive harvest.” The next step? Installing solar panels to power a water pump, of course.

These improvements are critical, as environmental models consistently indicate that Morocco is among the top 30 countries to be negatively affected by climate change. This past year, the country saw a decrease of 6% in its GDP due to poor harvests as a consequence of low rainfall, which will only get more scarce in the future.

In the Atlas Mountains, the story is similar, with an added benefit that planting trees slows erosion and rebuilds slopes for agriculture. Planting olive trees and using better techniques are critical for both retaining soil and generating income. “The trees stabilize the soil, suck planet-warming carbon dioxide from the air and provide a cash crop for local people,” according to IFAD technical expert Jacopo Monzini. “Climate problems come from bad management of natural resources,” he said, noting that deforestation of mountain slopes worsens erosion. “So we are investing to re-establish key ecosystems.”

Today, the olive trees help prevent rainwater running straight off the land into the river below, a key both to preventing erosion and preserving water in an area with other irrigation available. These changes have had an impact of all segments of rural communities, encouraging young people to stay working on the land with higher quality returns, and enabling older relatives to gain experience and skills in new agricultural opportunities. Income earned through their cooperatives provides opportunities, gives women greater freedom to experiment with other income-generating options such as producing honey, links the farmers more closely to regional markets and beyond, and frees the beneficiaries to believe in futures that a generation ago were unimaginable.