Announcement Made during King Mohammed VI’s Historic Visit to Nigeria 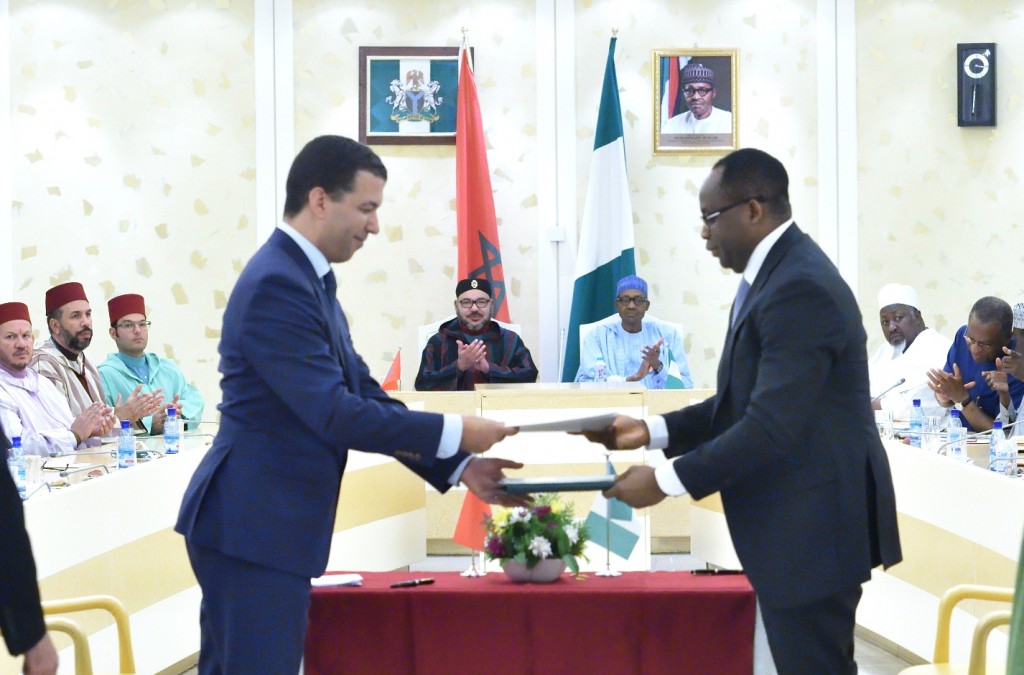 Morocco’s King Mohammed VI and President of Nigeria Muhammadu Buhari preside over the signing ceremony of an agreement to construct a transcontinental gas pipeline from Nigeria to Morocco.

Washington, DC, December 6, 2016 (MACP) — During a historic visit to Nigeria that began late last week, Morocco’s King Mohammed VI presided over the signing ceremony of an ambitious agreement to construct a transcontinental gas pipeline. At completion, the pipeline will bring Nigeria’s energy resources through West Africa to Morocco; and eventually to European markets with Morocco serving as a gateway.

Speaking at the ceremony, Nigerian Minister of Foreign Affairs Geoffrey Onyeama said that one objective of the pipeline is the acceleration of “electrification projects across the region, thereby serving as a backbone for the creation of a competitive regional electricity market with the potential to be connected to the European energy market.”

Ithmar Capital, Morocco’s sovereign wealth fund and co-partner in the venture with the Nigeria Sovereign Investment Authority, said in a release, “The new collaboration between Morocco and Nigeria is intended to set a model for South-South cooperation and act as a catalyst for African economic opportunities. It aligns with His Majesty, King Mohammed VI’s regional strategy, in which he has declared that Africa is the top priority in Morocco’s foreign policy and that the Kingdom will contribute to economic, social services and human development projects that directly improve the lives of people in the region. This includes on projects related to the energy sector, and notably sustainable and green projects.”

The pipeline is one element of the Strategic Partnership Agreement and Memorandum of Understanding signed between the two countries, agreements that “will see [Morocco and Nigeria] cooperate on bilateral investment for the first time in recent history,” according to Ithmar Capital. The agreements also encourage joint investments in food security, renewable energy, natural resource management, and agribusiness and fertilizer production.

The agreements and visit symbolize a new chapter in Nigerian-Moroccan relations, and follow recent visits to Rwanda, Tanzania, Madagascar, and Ethiopia in a continued signal of King Mohammed VI’s commitment to strengthening Morocco’s African diplomacy.