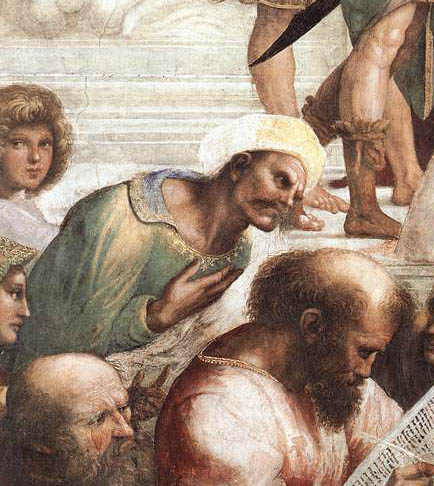 Averroes, as portrayed in Raphael’s “The School of Athens.” Photo: Wikipedia Commons.

Hanging in the Vatican, Raphael’s fresco “The School of Athens” depicts a highly anachronistic meeting of some of the greatest thinkers in human history. Plato, Aristotle, and Socrates walk through a crowd that includes a few 15th century Renaissance figures alongside ancient Greek philosophers like Archimedes and Euclid.

Seated on the left side of the fresco is a man whose style of dress starkly stands out amidst the togas and flowing robes of the Greeks. This man appears to be staring over the shoulder of Pythagoras, seemingly intensely interested in whatever the legendary Greek mathematicians is working on.

He is neither a Greek philosopher, nor one of Raphael’s Renaissance contemporaries. To Raphael and the rest of the West he was known as Averroes, the Muslim physician and philosopher famous for preserving and commenting on the works of Aristotle and Plato that were thought lost during the so-called “Dark Ages.”

However, for the Almoravid and Almohad Caliphs of 12th century Morocco, he was known as Ibn Rushd, just one of the many brilliant scholars of Islam, science, and philosophy that emerged during the Middle Ages.

Born Abu al-Walid Muḥammad Ibn Aḥmad Ibn Rushd‎ on April 14, 1126 in Cordoba, Spain—then part of the Moroccan Almoravid Caliphate—Ibn Rushd was the third generation of an influential family of scholars that had served the ruling Moroccan dynasty as religious leaders and judges in Cordoba for almost a century. At the time, Cordoba was a cultural center of the Morocco-ruled Caliphate, where a diverse population of Muslims, Jews, and Christians influenced the nascent Islamic law and philosophy with their legal, scholarly, and cultural traditions.

It is in this multicultural environment that Ibn Rushd received his education in science, religion, Islamic jurisprudence, and medicine. Ibn Rushd especially excelled at the latter, and prior to his foray into philosophy was primarily known as a talented physician and scholar of medicine, writing several medical textbooks that would be used throughout Europe and the Middle East for generations to come.

After completing his studies and earning distinction in Spain, Ibn Rushd moved to Marrakesh to work more closely with the ruling Almohad Caliphate after the Almoravids were deposed. He was initially appointed as a judge, but soon became close with the Caliph’s advisors and eventually the Caliph himself, Abu Yaqub Yusuf.

Yusuf had become curious about the works and philosophy of Aristotle, but felt that the Greek philosopher’s writings were too complicated and that the available Arabic translations were of poor quality. To fix this, he commissioned Ibn Rushd to write a series of translations and commentaries on Aristotle’s works.

This initial assignment inspired Ibn Rushd to translate and write commentaries on not just Aristotle, but on Plato, Ptolemy, and several other Classical philosophers. The Caliph’s casual demand for the “Sparknotes” of Aristotle ended up being the reason that these writings were preserved and later promoted for generations of Middle Eastern and European Renaissance scholars (and freshman philosophy majors) to come.

Though Europe would lionize him for preserving and popularizing the Classics, Ibn Rushd wrote many of his own treatises on philosophy, often comparing and contrasting Greek and Islamic thought.

His influence was not limited to academia, though. For one, he served as a legal advisor to the Caliph for many years before his death in Marrakesh in 1198 CE. But he is also credited with helping to convince the Almohad Caliphs to abandon the strict and rigid Zahiri school of Islamic law and adopting the more moderate Maliki school, which focuses on consensus of judges and precedent in addition to the Quran and the Hadith. Indeed, almost a millennium after Ibn Rushd arrived in Marrakesh to serve as a judge and translate Aristotle for the Caliph, his impact can still be felt in Morocco, which still uses the Maliki school as the foundation of its religious teachings and law system.