August 20 is the day Morocco marks Revolution of the King and People Day, commemorating the 1953 exile by the French colonial authorities of King Mohammed VI’s grandfather, King Mohammed V. The exile is considered the beginning of the modern independence struggle that was successful in restoring Moroccan independence in 1956.

The King chose to focus in this year’s speech on Morocco’s history in Africa, and its commitment to the continent and its future. He noted that beyond the “common struggle for freedom and independence” at that time, today, “The aim is to achieve the shared development and prosperity all African peoples are yearning for.”

This theme of solidarity and shared future has been a consistent focus of the King’s economic and diplomatic outreach on the continent, based on a strong belief that Africa must be in control of its destiny and act for all its peoples. He insisted that Morocco’s commitments “Reflect a sense of loyalty to a shared history and illustrate our firm belief that ours is a common destiny. They are the result of profound, realistic reflection which is itself governed by a long-term, strategic vision and a gradual, consensual approach.”

King Mohammed VI has proactively demonstrated Morocco’s commitment to Africa “Substantiated by more than fifty visits to over 29 countries – 14 of which I have visited since October 2016. That policy is also aimed at serving shared interests through solidarity-based, win-win partnerships.” Morocco has signed hundreds of economic, technical, and cultural agreements with its Africa counterparts, supports thousands of sub-Saharan Africa students in Moroccan universities, and has provided humanitarian and peace-keeping support in times of crisis and upheaval. 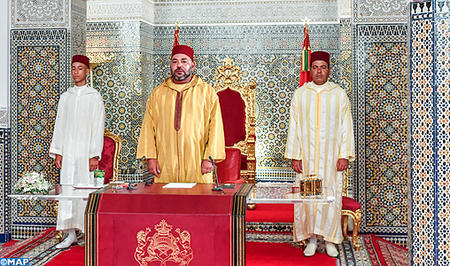 A key result of these efforts has been “Morocco’s return to the African Union and…the agreement in principle to Morocco’s request to join the Economic Commission of West African States.” No small feat, considering the “obstacles thrown in our way…This achievement attests to our African brothers’ and sisters’ perception of Morocco as a credible player – one whom they hold in high esteem.”

The King’s personal commitment to Africa has been mirrored in the growing network of institutional, organizational, and business ties between Morocco and other African states. He is greatly concerned with the “continent’s progress and the services provided to African citizens,” and emphatically noted, “We are currently in the process of building an Africa that believes in itself, is committed to solidarity and rallies behind concrete projects while being open to its surroundings.” This emphasis on ”concrete projects” reflects many initiatives in Africa over the last 15 years, ranging from agricultural programs and transportation infrastructure, health, and educational facilities, to financial and technical assistance agreements, among others.

The King clearly delineated the nature of Morocco’s long-term presence in Africa. “I have opted for a policy based on solidarity and for balanced partnerships grounded in mutual respect and the fulfilment of African peoples’ shared interests. Morocco has never engaged in influence peddling. Instead, it has opted to put its expertise and know-how at the disposal of its African brothers and sisters. Money comes and goes, unlike knowledge and skills; it is these that help meet people’s needs.”

Regarding the Western Sahara conflict, which remains controversial with some African neighbors, the King noted that “International support for the autonomy proposal has continued, as illustrated by the growing number of states which have withdrawn their recognition of the fictional entity and by the legal settlement concerning Morocco’s economic partnership with a number of influential powers.”

From his speech, it is clear that King Mohammed VI has a comprehensive and strategic vision for Morocco in Africa; and he has worked hard to make it a reality. It is based on a shared destiny, common struggle, mutually beneficial relationships, and shared values and principles that will best serve the people of Morocco and Africa and the progress of the continent.