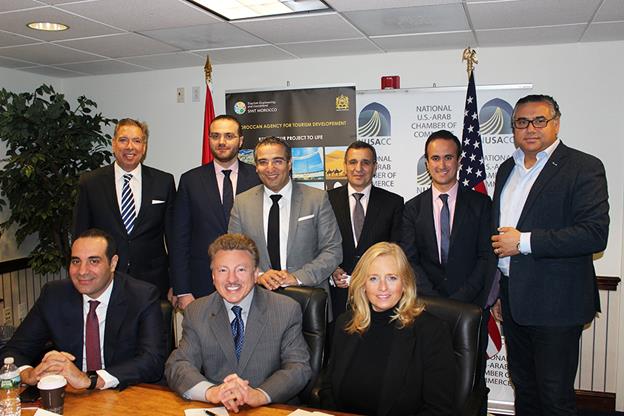 First tourism investment “road show” to the United States organized by the National U.S.–Arab Chamber of Commerce (NUSACC), in partnership with the Moroccan Agency for Tourism Development (SMIT) Photo: NUSACC

Washington, D.C., Los Angeles, and New York City were the destinations for an investment promotion tour coordinated by the National US-Arab Chamber of Commerce (NUSACC) in partnership with the   Moroccan Agency for Tourism Development (SMIT). This was the first-ever effort of its kind and was reported as a success in terms of meetings with companies, government officials, and investment firms.

Morocco has enjoyed increasing number of visitors and air travelers for more than a decade, with increased numbers coming from all points of the globe. The push has been energized by King Mohammed VI’s economic diplomacy, which has taken him to many countries in Africa, as well as Russia, China, and India. This has resulted in double digit growth from those destinations and its growing air network with over 40 destinations in Africa alone connecting to Europe and the US.

The purpose of the tour, according to Imad Barrakad, Chairman and CEO of SMIT, was to introduce US companies to the “Unprecedented growth in the tourism and hospitality sectors.” Given Morocco’s key geographic location, extensive experience in tourism development, unparalleled cultural and historical sites, and famous cuisine and music, it offers extensive opportunities for investment ranging from chic upscale boutique lodgings to major destination locals like Marrakech where you can find all the major international brands including Virgin, Hilton, Four Seasons, Accor, and many more.

With non-stop flights to Casablanca from New York and Washington, D.C., Morocco is less than seven hours away. As David Hamod, President and CEO of NUSACC noted, “This high-level delegation did an excellent job of highlighting Morocco’s comparative and competitive advantages in tourism. The Kingdom’s role as a gateway, coupled with its stability and security, has made Morocco a prime destination.”

Quite importantly, given travel concerns in the region, according to NUSACC, “Earlier this year, Morocco received an additional boost…when the US Department of State launched a new system of travel advisories for ranking security threats around the world. Morocco was the only country in North Africa to receive a “Level One” ranking, encouraging American travelers to “exercise normal precautions” when visiting there.” This is in sharp contrast to other countries in Africa and southern Europe.

NUSACC’s report mentioned that the Moroccans focused on four potential areas of investment:

“Delegation leaders emphasized Morocco’s ease of doing business, including one-stop-shop support provided by SMIT. Salim Mikram, SMIT Business Development Head, explained that foreign entities doing business in Morocco are entitled to full repatriation of capital and profits. Moreover, according to Mikram, there is no restriction on land ownership, and investors may recruit domestic or international staff.”

The only question left for those who have never visited Morocco is “What are you waiting for!”

Click HERE to read the full NUSACC report with more information on investment projects, incentives, and a city-by-city description of the delegation’s activities.